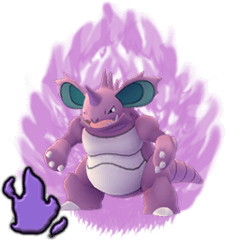 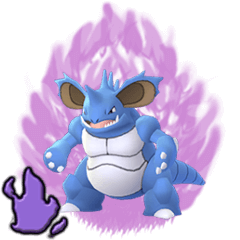 Shadow Nidoking suffers from middling stats and an unfortunate typing. In the main series games, Nidoking was a jack of all offensive trades, but he misses his trademark massive movepool in GO.

Access to Fury Cutter lets Nidoking stand out from other Pokemon, most notably Nidoqueen. While its damage output is somewhat laughable, its faster energy gains enable Nidoking to access its Charge Moves sooner. Poison Jab is also viable due to its significantly stronger STAB damage output, but going for this option would make Nidoqueen seem more appealing due to her greater bulk.

Earth Power is the generally preferred ground-type attack due to its faster charge time, though Earthquake offers more raw power and power per energy spent. Megahorn provides solid power and aforementioned counter-coverage against Psychic types, making it the preferred second charged-move. Sand Tomb is recommended for its cheap energy cost, enabling Nidoking to bait shields more easily, as well as applying a guaranteed debuff on the opponent.

The Shadow variant doesn't really do Nidoking any favors in PvP. It's simply not a strong option.

Nidoking is entirely unviable in the Master League.