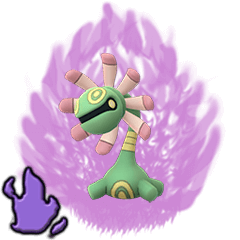 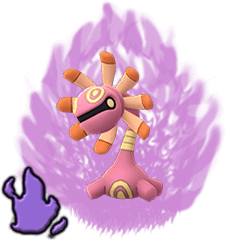 With a 20% boost to its attacking prowess, this barnacle outpaces titans such as and Shadow Bellsprout! And the Rock typing can potentially help against normal attacks such as Body Slam!
Cradily never had much hope in PVE, and the Shadow Form isn’t much different. Numerous superior Grass and Rock types have been available, even in Generation 1. It’s probably best to use it in PVP, though even that's iffy.

Stone Edge (100 power/55 energy) and Grass Knot (90 power/50 energy) benefit from STAB to provide very solid coverage, only being walled by Steel-types and certain dual-type Fighting Pokémon. Bulldoze (80 power/60 energy) isn’t very good. While you certainly could swap out either of the other moves to give you anti-Steel coverage, swapping Stone Edge leaves you hard walled by a lot of Flying-type Pokémon, and swapping Grass Knot just makes Shadow Cradily a worse version of Mud Shot/Stone Edge/Earthquake Quagsire (which is a better Great League investment anyway).