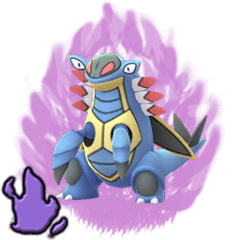 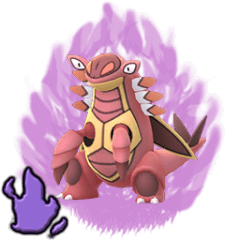 Shadow Armaldo could be an okay Pokemon... if it had the moves to do basically anything worthwhile.

Fury Cutter is the preferred fast move, featuring fast energy generation and also benefits from STAB. Struggle Bug deals more damage, but doesn't let Armaldo use its charge as frequently and overall is an inferior pick.

Rock Blast takes advantage of STAB and a low energy cost which makes it the main charge move for Armaldo. Cross Poison is the cheapest charge move energy-wise and allows for shield-baiting, but with a with a 1.14 DPE rating it's a terrible move otherwise. Water Pulse is horrible with an expensive 60 energy requirement for only 70 damage (1.17 DPE) but at least can help cover Armaldo's weakness against other Rock-types.

Armaldo has an odd Bug/Rock typing which makes it vulnerable to only 3 typings, but doesn't really provide any meaningful resistances otherwise. A stat distribution focused on offense results in overall fewer defensive stats which hurts it more. However, Armaldo's main liability is its horrible moveset, with all of its charge moves offering little damage for the amount of energy used up (DPE). This leaves Armaldo relatively toothless in comparison to other candidates in Great League, and results in a long list of losses against the popular meta picks.

A higher CP cap in Ultra League allows Armaldo to utilize its ATK stat more, but it still has the same problems as it did in Great League. Wins against Umbreon and Lugia are appreciated, but losses against most meta picks still discourage its use.

If Armaldo couldn't get many wins on an equal CP playing field, just wait until it faces Pokemon with a CP disadvantage.