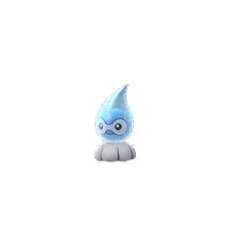 Rainy Castform doesn't have the stats to be viable in the meta. At least it looks cute in your dex though.

Water Gun is preferred for its superior energy gain compared to Tackle, in addition to STAB.

Weather Ball is a strong move for its low energy cost, gets STAB, and can be used frequently. Thunder is recommended for additional coverage, though it's not exactly cheap on energy.

Rainy Castform is a mono-Water type with decent bulk. Access to the efficient move Weather Ball makes Rainy Castform rather unique, however having only one significant charge move makes it outclassed by the numerous Water-types who already compete for a roster slot.

Rainy Castform could be used in Master League to represent the teardrops of defeat.