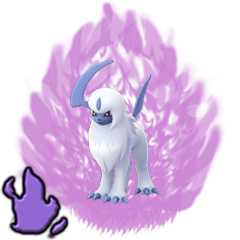 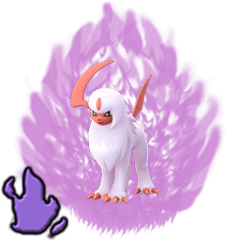 A high-damage DPS Dark attacker, Shadow Absol provides some value with mono-dark typing, resisting common coverage moves like Shadow Ball and Psychic. The biggest problem is that it can’t really provide significant niches over the more flexible Dark Types that compete with it durectly. Aside from that, Shadow Absol is still a great dark type attacker, able to fulfill roles against Ghost and Psychic Type raid bosses.

Snarl or Psycho Cut + Dark Pulse and Thunder or Megahorn

Snarl falls behind Psycho Cut slightly in energy gains, but offers significantly more damage output thanks to STAB. The latter can be chosen if that slightly extra energy generation is needed.

Dark Pulse costs the least amount of energy and benefits from STAB to provide Dark-type coverage. Payback is less desirable due to its greater energy cost. Megahorn provides Bug-type coverage and costs slightly less energy than Thunder, while the latter offers Electric-type coverage. Either can be chosen depending on what coverage would be more preferable.

Absol is the definition of "glass cannon" in PvP, with extremely fragile bulk almost identical to that of Gengar's. Since Absol can't tank damage very well (if at all), Absol demands shields to perform well, though shields won't save it from Pokemon with strong fast move damage output like Deoxys Defense Forme or Altaria. Pokemon with emphasis on charge moves instead of fast move damage tend to be better matchups for Absol, though Absol tends to lose more often than not due to its poor bulk. Overall Absol shouldn't be used for PvP, and if it intends to compete then specific PvP formats that limit its weaknesses would be more ideal.

Shadow Absol tends to have more consistency in its Dark-type role against Ghost-types and Psychic-types, however it has severe struggles against any other Pokemon. It should also be noted that Cresselia's Moonblast is a OHKO against Shadow Absol, making this squishy Pokemon a very risky pick compared to other options.

Absol lacks stats for Master League, with no real clean wins against the meta.