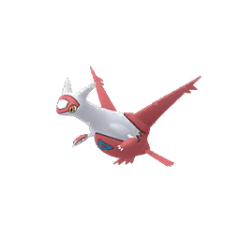 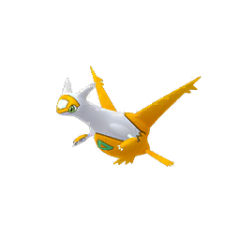 Latias along with her twin Latios are not the powerhouse legendaries of this generation, and of the two Latias gets the short end of the stick. Having the inverse of Latios's Atk and Def stat means she's bulky and underpowered. She's built to take down gyms as a Dragon or Psychic-type sweeper but still can't compete with more common Pokemon like Dragonite or Espeon.

In the main series, Latias was given access to a Mega Evolution that will help patch up her weaknesses in generation 6, but when/if/how this is released is still a mystery.

A PVP staple, Dragon Breath has 4 DPT (Damage Per Turn) and 3 EPT (Energy Per Turn), meaning it's definitely Latias' best quick-move. Outrage (110 Power/60 Energy) is a good attack in PVP, with a higher damage-per-energy ratio than the famed Dragon Claw. However, it takes nearly twice as long to charge, meaning it functions best as a closer move while the later is best for shield-shredding. Thunder (100 Power/60 Energy) and Psychic (90 Power/55 Energy) are weaker than Outrage, but they give Latias much needed coverage.

Charm is a very hard-hitting move that's completely unique to Latias among Dragon-types, but it emphasizes its issue of only having slow charged moves by generating energy at an extremely low rate. It can come as a surprise to opponents, though it doesn't really change Latias' already positive matchups against Fighting and the neutral ones against other Dragons.

Latias is outright outclassed in the Great League. Other Dragons such as Altaria rule this tier, leaving very little room for this jet-girl.

The same goes in this other league, where Giratina truly shines, and even its brother Latios is generally preferred due to the quicker access to Dragon Claw. She can just barely score a win against Giratina-Altered if it doesn't have any shields, but that's not exactly reason enough to justify her use on a team. Her advantage tends to come in with a bit of shield investment and in neutral matchups where she can use her good moveset and high bulk to score a win, but in reality her niche in the tier is best described as wide yet not very deep.

Her niche here deepens a bit against some threats. Latias has winning matchups against Kyogre, Machamp, and Heatran. She can also take down Giratina-A, and puts a large dent in Lugia before going down. Again, she needs some shields to be truly effective, but she's got many good neutral matchups and is a decent closer. However, the same problem persists: you can probably find another Pokemon who's better at filling whatever niche it has.

Countering the Lati-Twins and Their Use in the Meta