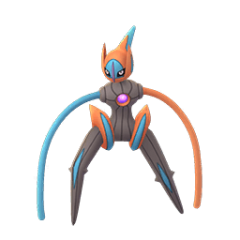 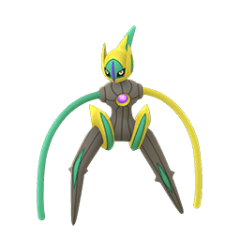 In the main series of games, Deoxys Speed Forme isn't the strongest Pokemon by itself, but its insanely high speed and great moveset made it an extremely strong support-Pokemon that could easily set the stage for a victory if played right. Sadly, here in Pokemon Go, we don't really have support roles, and speed doesn't translate into this system extremely well, making Deoxys-Speed the single most awkward Deoxys form out there.

Deoxys-Attack has insane raw power that makes it into the single glassiest glass cannon out there, Deoxys-Defense has good power and staying power that makes it a king in PVP Great League, and even normal Deoxys has a niche as a potential electric attacker, but poor Deoxys-Speed sits with nothing to call its own. Unless something changes, Deoxys-Speed joins the ranks of other legendaries that did not translate well into the environment of Pokemon Go such as Registeel and Suicune as dex-fillers, and sadly nothing more.

Despite lacking STAB, Charge Beam is more preferable due to its significantly higher energy generation. Zen Headbutt is underwhelming even with STAB.

Psycho Boost is the primary charge move for Deoxys Speed Forme due to its low energy cost and high DPE rating backed by STAB. Thunderbolt is a good move in PvP and offers some form of coverage against various common Pokemon. Swift performs very poorly in PvP.

Deoxys Speed Forme currently can only be obtained from EX raids, and with a minimum floor IV of 10/10/10 it's not even possible for SPD Forme to be eligible for Great League. Maybe one day it'll be released in research breakthrough or possibly allowed to be traded.

Deoxys Speed Forme doesn't perform as well as its Defence Forme in PvP due to a lack of bulk and a worse moveset. While Deoxys SPD Forme can get to some of its charge moves slightly faster due to greater energy gains from Charge Beam, not having access to the significantly more powerful fast move Counter is way more impactful. Overall a disappointing choice for PvP as it can't endure hits like its DEF Forme, and doesn't pose much threat if its charge moves get shielded.

Ultra League is mostly comprised of Giratina who wrecks most of their opponents, hard counters against Giratina, and then a mess of competitors who try to counter either or both. Unfortunately Deoxys SPD Forme doesn't fit well into this meta which makes it less compelling to use for Ultra League.

Deoxys SPD Forme has a max CP of 2879, which is quite insignificant in comparison to many of the major players in Master League. With a very poor win ratio against most meta picks in this league, the only thing Deoxys does fast is lose.

How to Fix Deoxys Speed Forme