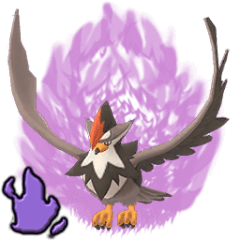 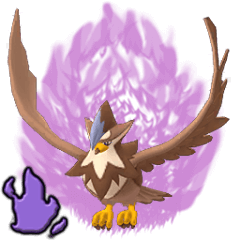 Shadow Staraptor rises to the sky and slams into anything that opposes it with super-sonic speed! Outside of the lone possibility of Mega Pidgeot, Shadow Staraptor is the ultimate incarnation of the "basic bird" that we have in the game to date. Its DPS is very competitive with many top Pokemon within the type, making it a decent investment for those who want to shore up their Flying Type team. It would have been a big deal on release, but Shadow Honchkrow hit the scene at the same time, lessening Shadow Staraptor's impact.

Both of Staraptor's fast moves have identical stats and both benefit from STAB. Wing Attack is more preferable for Staraptor's role as a flier and at least can be Super Effective in some matchups.

Brave Bird is Staraptor's primary charge move thanks to its lower energy cost in addition to receiving STAB. Close Combat costs less energy than Heat Wave and provides meaningful coverage. Heat Wave has a poor 1.27 DPE and costs too much energy to use.

Staraptor is a Pokemon doesn't perform as awesome as it looks. An offensive stat distribution severely lowers its bulk, while its moveset leaves a lot to be desired. Without a low energy charge move, Staraptor finds it difficult to apply shield pressure or deal any significant damage if shields are in play. Overall a disappointing pick for Great League, though its typing gives it the resistances needed to win against Ghost-types like Haunter and Alolan Marowak.

Staraptor isn't the bird of prey it sought to be, with more losses than wins due the same issues with fragility and a cumbersome moveset. Solid wins against Giratina-O are mostly due to Staraptor's Normal-typing which double resists Ghost attacks, but that's not enough to justify its use when most other popular picks make Staraptor their prey.

With a max CP of 2825, Staraptor looks more like a chicken dinner than a raptor in Master League.