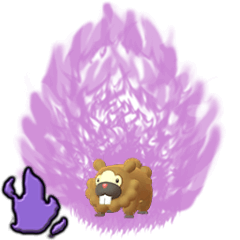 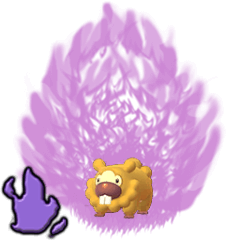 If you can see Bidoof, it can see you. If you can't see Bidoof you may be only seconds away from death. Bidoof can win a game of Connect Four in only three moves. Bidoof's stats surpass infinity. Twice.

Tackle or Take Down + Superpower* and Crunch or Hyper Fang

Tackle sports higher damage output but worse energy generation, while Take Down is the exact opposite. While the latter enables the win in specifically the 1-shield mirror due to it being able to reach a 2nd Charge Move, the former is better in other even shielding scenarios thanks to its stronger damage.

Superpower is highly valued for the Bidoof Cup due to Fighting-type coverage being Super Effective against Bidoof, though its self-debuff needs to be taken into account. Crunch offers no significant value in terms of coverage, but costs less energy than other Charge Moves, allowing it to be used sooner. Hyper Fang benefits from STAB and requires a moderate amount of energy, while Grass Knot boasts a respectable Damage Per Energy (DPE) value compared to other options, and provides Grass-type coverage, for whatever they're worth. Shadow Ball, Thunderbolt, and Ice Beam are limited to the Bidoof event and Elite TMs, but require the most amount of energy, and aren't useful for the Bidoof Cup.

Bidoof is so powerful it instantly one-shots any opponent that dares to even think about challenging it. In reality Bidoof's only value is memeing in the Bidoof Cup.

Giratina ain't got nothing on the real king of Pokemon, our lord and savior Bidoof. Doesn't Giratina know that Ghost-types are doubly resisted by Normal-types, AKA Bidoof? What's that, Giratina is also a Dragon? Didn't you know that every time Bidoof breathes a Dragon gets KO'd?

Legend has it that Bidoof never saw use in Master League because it was too cool for the cool kids.