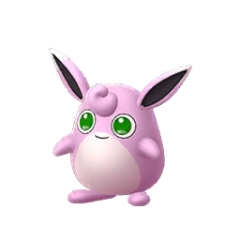 In days of yore (aka 2016), Wigglytuff was the surprise winner of Niantic’s stat conversion formula, with decent offensive stats relative to all other species that was bolstered by massive HP.

2016 feels like a long time ago. Wigglytuff is now bad. Its offense is decidedly trash, and while players still hype its huge HP, Wigglytuff’s double digit Def renders it about as frail as everything else. Its only positive attribute is a low max CP that lets it demotivate in gyms more slowly.

Finally! Wigglytuff finally gets Charm which significantly increases its performance in PvP, not to mention benefiting from STAB.

Play Rough takes advantage of STAB to deal a good amount of damage to even some neutral opponents. Ice Beam is a welcome addition to Wigglytuff and is preferable for its coverage against many common meta picks. Dazzling Gleam performs very similarly to Play Rough and does have a slightly higher DPE value, but is less preferable due to its higher energy cost. Hyper Beam costs too much energy to be optimal, though it's possible to surprise some opponents.

Wigglytuff was a popular gym defender during the early days of gym defense thanks to its good bulk and interesting Fairy/Normal typing. The move rebalance on July 9, 2019 gave Wigglytuff the buff it needed to move up in the ranks of PvP thanks to Charm. While poor energy gains still prevent Wigglytuff from applying significant shield pressure, the raw damage from STAB Charm combined with Wigglytuff's good bulk is often enough to beat down most opponents who don't resist Fairy-type attacks. Overall a solid option as a part Fairy-type, though the abundance of Steel-types in the meta makes it more difficult to use.

The level 50 update enables Wigglytuff to improve its performance in Ultra League with XL candy. While it has an unimpressive win ratio overall, one major perk of Wigglytuff is that its typing and movesets allow it to easily counter the ubiquitous Giratina, even in disadvantageous shield situations. Ancient Power is the only move from Giratina which it doesn't have a double resistance to! Because of how dominant Giratina is in Ultra League, Wigglytuff's big win against it makes it an decent option for this league.

Wigglytuff doesn't have the stats needed for Master League.