Community Posts with Keyword Golbat All 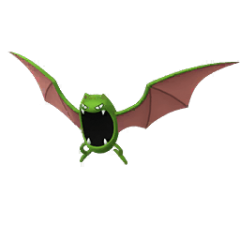 Golbat is nothing more than a stepping stone to Crobat in PVE, but consider holding onto one for the Great League in PVP if you happen to find one with a good IV distribution.

Wing Attack is the preferred fast move, featuring above average energy generation while also getting STAB from Golbat.

Shadow Ball is the most powerful charge move available to Golbat, and is almost mandatory if Golbat is to ever threaten its opponents at all. The rest of Golbat's charge moves are all lackluster in performance and deal poor damage, but Poison Fang and legacy Ominous Wind cost less energy and can be used for shield baiting. Air Cutter sucks for its high energy cost even with STAB.

Golbat is more of a niche pick in Great League. Well-rounded stats don't result in extraordinary bulk, and weaknesses to common typings risks Golbat's survivability. Golbat also has issues with its somewhat poor moveset, as its charge moves deal little damage for their cost (low DPE) with the exception of Shadow Ball. Regardless, Golbat still makes short work of its specific prey in the form of Grass, Bug, and Fighting-types. Easy wins over the popular Medicham and Venusaur are definitely appreciated, while demanding two shields to beat Azumarill is risky. Unfortunately more losses than wins often keeps Golbat from being picked over other options.

Golbat's max CP of 1976 limits its use to mostly Great League. It can still dominate Grass-types and some other off-meta Pokemon, but a long list of losses against meta picks discourages its use.

Consider Golbat's next evolution at least.

"Use items to evolve Pokemon 15 times" quest for level 42
Glad I hoarded my Sinnoh Stones and Unova Stones, but wondering which Pokemon to use…
Should Pokémon go add a second fast move?
It would be very beneficial when it comes Pokémon ttar being able to use it as Dark…
Support Activation my GYM
Hi! I hope for your support in activating my pokemon go GYM, please help me through…
Which shadow Pokémon are worth powering up and which are not?
So far I have only powered up Mewtwo and Metacross. Not a big fan of glass cannons,…
Mega planning
So my brain is boggled at sheerly how to handle these Mega Evolutions. Getting their…
Read More