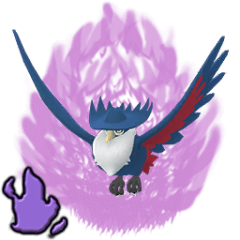 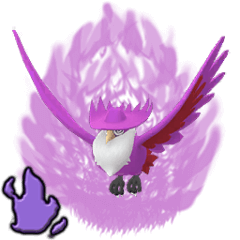 Shadow Honchkrow really is a boss of a Pokemon. Its combined solid Attack stat and great movesets means it can come out near the top of the Dark and Flying Type metas alike. It has outstanding role compression and high power, making investing in this ravenous Pokemon a solid investment for many players.

Snarl is recommended for its very fast energy generation, which lets it utilize its strong charge moves much sooner.

Sky Attack is a strong charge move that is efficient on energy and also benefits from STAB. Brave Bird will typically be your secondary move of choice, forgoing coverage for a massively hard-hitting attack that's death for them if unshielded, and death for you if it doesn't land. However, if you are really worried, you can run Dark Pulse instead for a slightly more consistent (but less powerful) option.

Honchkrow's already low bulk is brought down even lower by its Shadow state, making it incredibly glassy. This does take away a few matchups that you previously had a chance in just because you faint far too quickly, though you do also pick some up just because your Brave Birds and Sky Attacks hit so hard. Much like normal Honchkrow, though, it's just not that good in Great League.

Honchkrow is a little better in Ultra League than in Great thanks to the extra HP and better meta positioning. That said, it's still not great. It's still really glassy, and it's still unnecessarily risky.