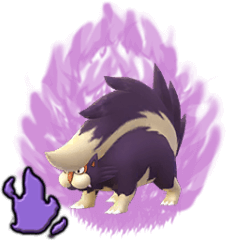 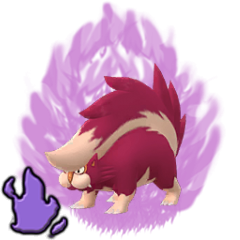 This mischievous skunk is actually not exactly a recommended investment. It's a poor Dark attacker, and a usable Poison attacker, though it really doesn't have much going for it that would make it worth the cost of raising it.

Poison Jab or Bite + Crunch and Sludge Bomb or Flamethrower

Poison Jab is usually preferred over Bite due to its significantly greater energy gains, though both gain STAB.

Crunch is required most of the time due to its lower 45 energy cost, in addition to its respectable STAB damage output. Sludge Bomb takes advantage of STAB to outperform Flamethower from a stats perspective, but the latter can possibly offer more meaningful coverage, including in the mirror match.

Skuntank gained attention relatively early in the PvP scene as a Pokemon with decent bulk, a relatively quick and strong moveset, and only a single weakness to Ground-type attacks. This made it quite popular in the Silph Arena's Twilight Cup in the early months of the PvP scene, though Skuntank has struggled to see significant usage outside of that format. Poison-type coverage isn't very valuable in open formats, and Skuntank will find it difficult to apply shield pressure with Bite and unspectacular bulk.

Skuntank's Dark typing is quite valuable in a meta that's largely dominated by Giratina. While Poison Jab movesets may struggle to beat Giratina, Bite movesets tend to cause more polarized matchups, especially against Fighting and Fairy-types like Togekiss. Overall not the most impressive pick in Ultra League, and without better results against Giratina as a Dark-type, its rating isn't likely going to improve.