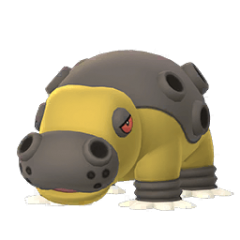 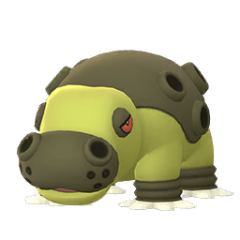 Hippopotas doesn't like to get wet, which may explain why its evolution doesn't get a mud-based fast move - although Hippowdon could definitely learn Mud Slap in the main series games at one point. Well, that's a missed opportunity. As is, Hippowdon prefers to sit in a gym, putting up at least a semblance of a fight with its solid bulk and threat of Body Slam.

Any of the elemental Fangs can be chosen depending on the typing coverage preferred. Fire Fang is useful against Hippowdon's weakness to Grass and Ice-type Pokemon, in addition to popular Steel-types. Ice Fang is generally valued for its wide coverage, while Thunder Fang is preferable against common Water Pokemon. Bite lacks energy gains and typing synergy to be useful.

Body Slam is a good move in general for PvP, as it doesn't cost much energy, hits for relatively neutral damage, and has a good 1.71 DPE (Damage Per Energy). Weather Ball Rock can also be chosen for its cheap energy cost, in addition to its valuable Rock-type coverage. Earth Power takes advantage of STAB and is less expensive energy-wise than Earthquake, which makes it more likely to be used before fainting. Stone Edge is a decent move for coverage but demands too much energy for Hippowdon to use often.

At first glance, you might assume that Hippowdon would be more suited for PvP than PvE due to its coverage moves and well-rounded stats, but a closer look reveals that Hippowdon actually falls behind some of the meta. While Hippowdon's Fast Moves deal a good amount of raw damage, the very poor energy gains actually hurts it more because of limited energy available for its strong Charge Moves. In addition, Hippowdon's mono-Ground typing is somewhat undesirable for PvP due to the ubiquitous Water and Grass-types in the meta, which lowers its overall win rates. Despite this, the hungry hungry hippo can still bite its way to victory against popular picks like Melmetal, Bastiodon, and Skarmory, with additional wins against Psychic-types if Hippowdon actually uses Bite instead of Fire Fang.

Hippowdon's typing and moveset combinations leaves it rather lackluster in comparison to other contenders in Ultra League. Easy wins against most Steel-type Pokemon are somewhat overshadowed by losses against numerous other foes, including Giratina. Perhaps Hippowdon would be happier defending gyms instead of getting washed away in PvP.

A max CP of 3085 is somewhat insufficient for Hippowdon to compete against the legendaries of Master League. A long list of losses is a big turn-off, though Melmetal and Raikou still don't like hippos.