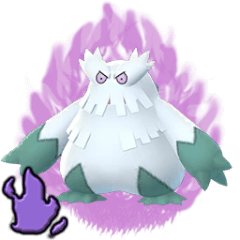 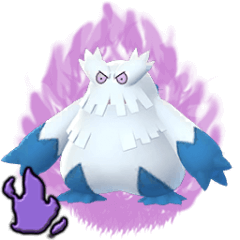 Abomasnow is a better Ice Type Pokemon than it is a Grass Type Pokemon, but it's still not a "good" Ice Type. Abomasnow has an atrocious defensive typing that leaves it easily beaten by many, many things, and its damage is lackluster. Probably best to let this Yeti just disappear into the great white north.

The rebalance to Abomasnow following the July 2020 introduction of Season 3 in Go Battle League gave the snowman much needed tools to its moveset. Powder Snow is now recommended for its fast energy generation. Razor Leaf features incredible damage output with STAB, but is held back by the worst energy gains in PvP.

The addition of Weather Ball (Ice) is a significant improvement, costing low amounts of energy for very respectable DPE (Damage Per Energy) efficiency, and can be spammed very frequently. Energy Ball is recommended with Powder Snow movesets for additional STAB coverage. Outrage costs a lot of energy and is generally not recommended, but can be useful with Razor Leaf movesets.

Abomasnow is a Grass/Ice Pokemon that's primarily used in the Grass-type role, and features average bulk and a risky typing. 7 weaknesses makes Abomasnow very vulnerable, and a weakness to Poison-type attacks generally gives other Grass Pokemon a defensive advantage compared to Abomasnow. However, Abomasnow has a niche over other Grass with its secondary Ice typing, which lets it be neutral to Ice-type attacks commonly seen from Water Pokemon, as well as fast STAB Ice-type coverage to beat many other Grass Pokemon head on. The addition of Weather Ball to Abomasnow's movepool is an incredible upgrade to its previously slow moveset, and helps the snowman climb up the ranks in the meta.

The level 50 update improves Abomasnow's performance in Ultra League significantly, as it directly benefits from access to additional stats needed to reach the CP cap of Ultra League. With access to a very fast moveset that can be spammed easily, Abomasnow's coverage is quite valuable in a meta that sees frequent usage of Dragon and Water-types. It should also be noted that Abomasnow's fast access to STAB Weather Ball gives it significant advantages against any other Grass-types that do exist in Ultra League.

Things start to really heat up in the Master League, and this snowman doesn't like the heat.