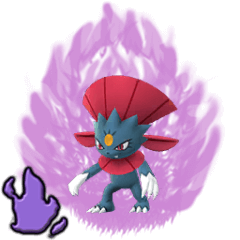 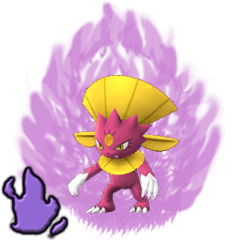 Shadow Weavile stands atop the mountain of Dark and Ice attackers and laughs, for its DPS is unrivaled in both of its types. Fear Shadow Weavile, for its claws bring ruin... just don't punch it, because it'll fall like a house of cards.

If you're fortunate enough to have a good Shadow Wevile, it will doubtlessly serve you well. With top-tier performance in both of its types, this Pokemon is an absolute monster and a true glass cannon to say the least.

Ice Shard is a solid fast move, but after the update Snarl blows it out of the water with its incredible energy generation, giving Weavile a niche as a unique spammy glass cannon.

Avalanche (90 Power/45 Energy) and Foul Play (70 Power/45 Energy) offer powerful STAB damage with very wide-reaching coverage. Depending on the meta, the much slower Focus Blast could also come in handy as a surprise nuke on Steel-types.

Weavile's defenses were bad enough, but Shadow Weavile can't even take many neutral hits before it drops.

Shadow Weavile has some niches in the Ultra League against both Giratina forms, but it's not the most generally useful Pokemon in this capacity.

Shadow Weavile can threaten many high-powered pokemon in the tier such as Giratina, Lugia, Garchomp, and Dragonite with its potent and pervasive STAB attacks. However, it is still frail, and doesn't perform well when it's not being played to its strengths. Honestly, it's probably better to just run Darkrai or Mamoswine instead.