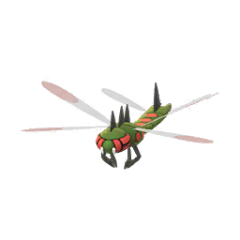 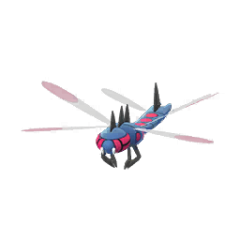 Yanmega looks a lot cooler and meaner after its evolution form Yanma, but unfortunately that's about all it has going for it. While it does compete with the top Bug-types in the game, it doesn't necessarily surpass them in performance. As a Flying-type, Yanmega got blessed with a double STAB Flying-type moveset, but is cursed with a lackluster Aerial Ace. Overall the dragonfly is quite good as a Bug-type attacker during Rainy weather, but Bug-types aren't really worth investing in.

Bug Bite and Wing Attack are very similar; the former sports the typical 3.0 DPT (Damage Per Turn) and 3.0 EPT (Energy Per Turn), while the latter trades a slight 0.5 DPT loss for a bit more 0.5 EPT (less damage for more energy gain). While both fast moves are viable, the difference in typing and expected matchups can result in one being more preferable than the other.

Aerial Ace is chosen in this moveset to diversify Yanmega's coverage, though Bug Buzz isn't a terrible move if extra Bug-type damage is needed. The nerf to Ancient Power following the April 2020 rebalance removes its viability.

Yanmega is a great choice as a Bug-type attacker in PvE, but unfortunately doesn't bug a lot of opponents in PvP. A relatively high ATK stat reduces its overall bulk, while its Bug/Flying typing gives it more vulnerabilities than resistances. Even though its Flying-type moveset could be of use in Great League, there's other competitors who can fulfill that role a lot better. Overall not too exciting for PvP, and while its name is mega cool, it'll mostly return mega losses.

Yanmega's typing isn't really relevant in Ultra League due to the sheer dominance of Giratina and abundance of Steel-types. Consider other Pokemon instead.

Yanmega can get wins against Grass-types and Groudon if the latter doesn't have Fire Blast. It's probably better to use Yanmega for PvE.