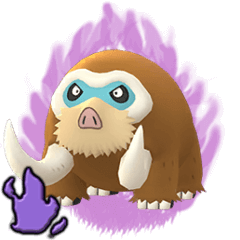 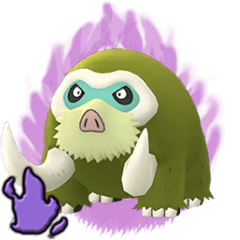 Say hello to the current king of Ice Types! Shadow Mamoswine surpasses even Shadow Weavile as the bringer of winter, with frigid powers so strong that it even has the DPS needed to solo Rayquaza in neutral weather. Shadow Mamoswine is a prize of a Pokemon that rises to the lofty heights held by monsters like Shadow Machamp and Shadow Metagross, and is definitely worth raising!

Powder Snow is preferred for its high energy generation, which lets Mamoswine use its strong charge moves sooner.

Avalanche is one of the most efficient charged moves in all of PvP, being both cheap and hard-hitting. Bulldoze is the second charged move of choice, giving you coverage for Steel- and Rock-types. This is especially meaningful because Ice + Ground charged moves allow Mamoswine to hit virtually every Pokémon for at least neutral damage. Stone Edge also provides valuable coverage but lacks STAB and shares coverage with the former Charge Moves. Ancient Power is not recommended due to its very poor damage output.

Thanks to Mamoswine’s higher attack stat, it gets outperformed by Piloswine. Use that instead.

While Mamoswine has positive matchups against Giratina and Lugia, so does Piloswine, and so do better Ice-types such as Lapras, which all have superior bulk. Once again, just use those instead.

Mamoswine is a bit of a sleeper pick in Master League, with Powder Snow + Avalanche allowing it to threaten any non-Dialga Dragon-types. Bulldoze provides some coverage for Steel-types, and Mud Slap can come in as a surprise to make it an even harder counter to them. Don’t underestimate this mammoth here.