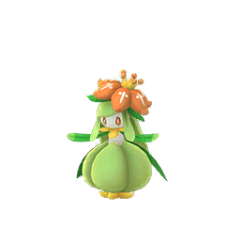 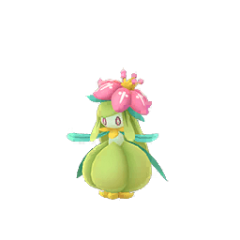 Lilligant's debut to Pokemon Go is a rather unimpressive one. With numerous superior Grass-types already in existence and available to many players, Lilligant's role in the meta is unfortunately allocated to being a dex entry at best.

Charm doesn't get STAB, but still offers significant damage output at the cost of the worst energy generation in the game. Hidden Power is a below average move, but its unpredictable typing can catch opponents by surprise, and sports slightly better energy generation.

None of Lilligant's charge moves are particularly good, and all cost significant amounts of energy which Lilligant struggles to keep up with. Petal Blizzard costs the least amount of energy, and benefits from STAB. Hyper Beam is listed here due to its neutral coverage, but 80 energy is extremely expensive.

As a mono-Grass type Pokemon, Lilligant has significant difficulties standing out among numerous other Grass-types in this league. Extremely poor energy generation, a very cumbersome moveset, and inadequate bulk all contribute to Lilligant's struggles to compete against the meta.

Ultra League generally doesn't favor Grass-types, and access to Charm isn't enough to justify Lilligant as an answer to Giratina over other options.

Lilligant has a max CP of 2550, which is inadequate for Master League. Its moveset problems don't make its situation any easier either.