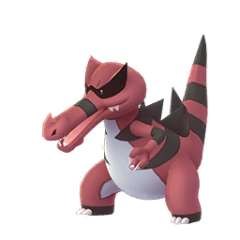 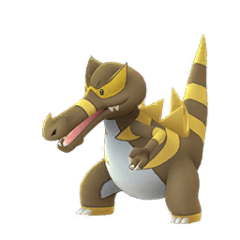 Krookodile is an interesting addition to Pokemon Go, with its unique Ground/Dark typing and coverage and decent stats. Unfortunately at this point of the game various Pokemon with superior stats and movesets already exist, leaving little room for Krookodile to squeeze into the meta.

Crunch costs the least amount of energy, benefits from STAB, and offers Dark-type coverage. Earthquake costs the most energy, also gains STAB, and provides wide coverage as a Ground-type attack. Outrage requires 5 less energy than Earthquake, but lacks STAB and is only Super Effective vs Dragon Pokemon.

Krookodile sports a unique Dark/Ground typing, giving it certain advantages over other Pokemon. Unfortunately a high ATK stat limits its bulk in Great League, making Krookodile rather fragile. A unique mix of Ground and Dark typing and move coverage is rather interesting, but not particularly complimentary, especially against the most popular Pokemon in this league: Azumarill. A total of six weaknesses, many of which are common, can be a significant issue for Krookodile, making it more niche than meta.

Krookodile's performance in Ultra League doesn't differ much from Great League, with the same issues of poor bulk and difficult typing synergy. Most of its niche plays are against common Ghost and Psychic-types, with losses against Registeel rather disappointing. Overall not the most impressive Pokemon in this league.

A max CP of 3046 is respectable, but somewhat lackluster in comparison to many meta picks in Master League. Krookodile's typing shines most in this league, where its coverage threatens two of the most powerful Pokemon: Dialga and Giratina (though the former can still win when committing both shields). Groudon is still the superior pick for Ground typing mostly due to its incredible stats, while Garchomp easily handles Krookodile in both open ML and Premier Cup. It should also be noted that Krookodile gets completely walled by Togekiss and struggles hard against Water-types as well. Perhaps those six common weaknesses are a bit too much for this Pokemon?