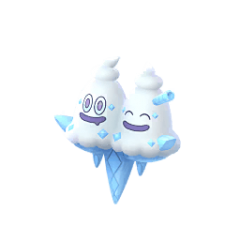 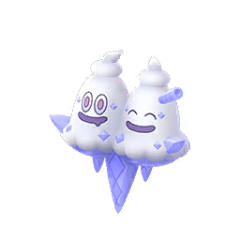 Vanilluxe is one of the Pokemon that people bring up when they want to highlight bad designs/the declining quality that has allegedly shown up as the generations march on. Whether you love or hate this deluxe icecream cone that was apparently inspired by the iconic Stay Puft Marshmallow Man from Ghostbusters, its presence in Go is all-around lackluster. If you want a good Ice Type, you could evolve a 0-0-0 Mamoswine and get better performance than a perfect icecream cone.

Frost Breath is by far the best fast move choice for Vanilluxe, though it doesn't meld extremely well with its charged moves.

With above average damage and below average energy gains, Signal Beam is the first real choice as the cheapest charged move option that can also fish for stat drops. Blizzard provides some very real Ice Type power for when shields are down as well.

Vanilluxe has a lot going against it: poor moves, bad offensive typing, bad stats for the CP-limited formats... the list goes on. It's definitely not worth considering seriously for any real Great League team.

The scene doesn't get any better with a higher CP. Too many Pokemon can make Vanilluxe their desert for it to be viable.

Poor Vanilluxe is just bet not used in PvP... or at all.