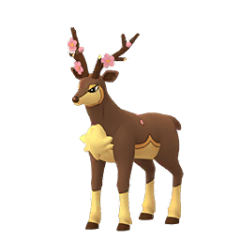 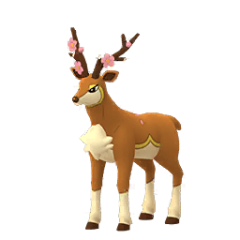 Sawsbuck suffers from the lack of a proper moveset and insufficient stats to see any use in the meta. At best it's a dex filler, but with four variants that are dependent on seasons, it might be a while before you catch em all.

Feint Attack sports the average 3.0 DPT and 3.0 EPT (Damage Per Turn and Energy Per Turn, respectively), but doesn't benefit from STAB. Take Down is one of the worst moves in the game, even with STAB.

Wild Charge costs the least amount of energy, and can threaten massive damage, but also carries a significant risk due to its self-debuff. Megahorn costs less energy than other options, and can be useful against other Grass-type Pokemon. Solar Beam and Hyper Beam both cost extreme amounts of energy, and aren't generally recommended due to their poor accessibility.

Sawsbuck sports a unique Normal/Grass typing, which gives it niche defensive advantages, though its poor bulk is unappealing. The lack of a cheap charge move (energy-wise) and having only average energy generation at best makes Sawsbuck somewhat cumbersome in PvP, often losing to opponents with spammier movesets. Overall not the sharpest tool in the shed, and probably one you can pass on.

With a max CP of 2416, Sawsbuck falls just below the CP cap of Ultra League. While its Normal-typing is useful against common Ghost-types in this league, its slow moveset and difficult coverage options severely holds it back.

Deer meat is possibly very nutritious for dragons and dinosaurs.