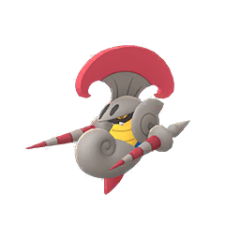 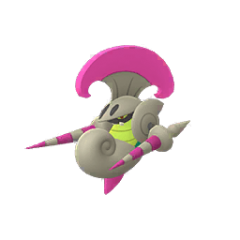 Escavalier shares similar typings and roles with other Bug-types, and it's among the handful of Bugs that have additional Steel-type resistances. While its typing and diverse moveset might be valuable for PvP, its unimpressive ATK stat and moveset for raids and gyms leaves it mostly a Dex entry outside of Trainer Battles. It's not the most amazing Pokemon for gym defense either, partly due to its lack of stats.

Aerial Ace costs the least amount of energy, though 45 isn't exactly cheap either, and enables Escavalier to wall opposing Grass and Bug-types. Drill Run provides wide coverage, including against Escavalier's only weakness to Fire Pokemon. Megahorn benefits from STAB to deal considerable damage, though its coverage may be more niche.

Escavalier looks like a tough no-nonsense type of Pokemon, with high offensive stats and a unique moveset. Access to the powerful Counter fast move lets Escavalier stand out from its competitors as one of the few Bug or Steel Pokemon with a Fighting-type fast move. Interesting choices in charge move options give Escavalier a lot of plays against various opponents, with Drill Run covering its only weakness against Fire-type Pokemon that don't fly. Unfortunately very poor bulk prevents it from enduring prolonged battles.

Escavalier's coverage against common Dark and Steel Pokemon in addition to Psychics (with Megahorn) gives it a niche in the Ultra League meta. While its bulk isn't exactly impressive by any means, its coverage against a variety of Pokemon can often make up for this. Unfortunately, it struggles significantly against Giratina.

With a max CP of 2889, Escavalier lacks sufficient stats to compete well in Master League. Its coverage against the meta is still quite valuable though, with possible wins against top picks thanks to its moveset. However, Escavalier struggles to win prolonged fights due to its poor bulk, and will lose to opposing Pokemon with faster movesets like Melmetal.