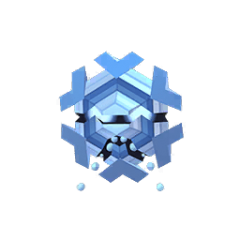 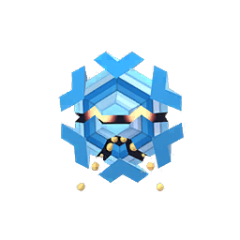 With neutral DPS lower than Aggron's, it's not really worth bringing Cryogonal out when raiding. At least it looks pretty in your collection.

Ice Shard gives both fair damage and solid energy gain, and is thus the fast move of choice.

Night Slash (50 Power/35 Energy) gives Cryogonal an interesting niche, and some solid rapid fire Dark-type damage. All of Cryogonal's secondary charged moves are pretty mediocre, so you can take your pick. Solar Beam is massively expensive, but strong if you can land it. Aurora Beam gives extra Ice-type damage if you need it, and Water Pulse can provide some nice coverage against Rock- and Fire-types that give Cryogonal a hard time.

Cryogonal matches up impressively poorly against the Great League metagame, even losing matchups you'd think it would win. It requires Aurora Beam to beat Altaria, and can barely even take down Tropius despite double super effective Ice Shard damage. If you're looking for an Ice-type, Glalie and Froslass probably do it better.

The increased prevalence of Dragon-types in Ultra League help Cryogonal out a bit, but not much. It can consistently beat things like Dragonite and Flygon, and actually manages to take out Dialga in the 1-shield matchup. However, a poor matchup against both Giratina-Altered and Fighting-types leave this snowflake not feeling too special.

It beats Groudon with shields up, which is...something? Rough losses to most of the common Master League Pokémon prevent Cryogonal from being a particularly useful or interesting pick. As such, it's probably better to look to another Ice-type, if you choose to run one.