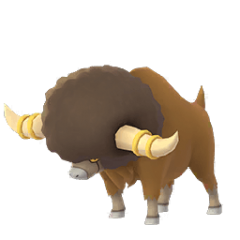 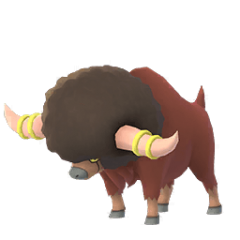 Bouffalant is another token regional Pokemon, but why on earth is it centered around New York? It likely has to do with the fact that the champion of Generation 5/Unova, Alder, used a Bouffalant, and Unova is largely based on the north-eastern United States... with very strange geographical biomes all scrunched into one little area. Even so, wouldn't it make more  sense to put a bison in the U.S. southwest....?

Mud Shot + Stomp and Earthquake or Megahorn or Skull Bash

Stomp costs the least amount of energy, benefits from STAB, and can be used frequently, though it can't be Super Effective. Earthquake and Megahorn are both powerful and efficient moves, each with different coverage depending on what the player needs. Skull Bash provides STAB neutral coverage, and a guaranteed buff to Bouffalant's DEF stage, but also costs the most amount of energy to use.

As a Normal-type, Bouffalant can't benefit from both STAB and a Super Effective multiplier at the same time, which limits its damage output. While Stomp is recommended to bait shields, it's a direct downgrade of Body Slam, which causes it some close matchups. The limitation of choosing between Earthquake or Megahorn is a significant problem, meaning Bouffalant has to chose which Pokemon it wants to cover at the cost of losses against others. If Bouffalant decides to not pick Stomp and go for both big hitters, it picks up easy fights in exchange for bait-dependent matchups, but is also too slow for most 2-shield fights against meta Pokemon. Overall Bouffalant has potential, but its inefficient moveset largely holds it back.

Bouffalant's Normal-typing is useful against Ghost-types, though it's cumbersome moveset may cause it to struggle against the overall meta. Just like in Great League, Bouffalant has to choose its moveset coverage and pick certain Pokemon to cover at the expense of others. While Bouffalant can win against other Normal-types in this meta, it may not necessarily be the best candidate for that role.

With a max CP of 2797, Bouffalant would appreciate more stats for Master League.

It's not an accident. I have an idea why this happens
I finally figured out why the new update bugs happened, I guess. But…
Can we please talk about the new updates?
Listen, if some big name youtuber uses MEMES to deal with sloppy shit that are most…
PVP2: Rare Movesets
So what pokemon do you use a very rare moveset on in pvp. For me its Gary + Outrage. …
PVP1: Debatable Movesets you have a hard time deciding on
So what are some Pokemon you have a hard time deciding between. For me there are 2…
Which regigigas to power up?
got a 15-14-14 shiny regigigas with Hidden Power Fire recently. don’t think I will…
Read More