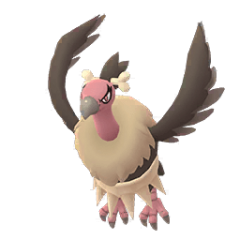 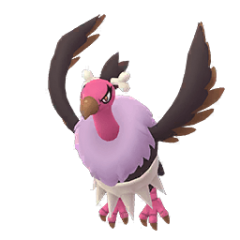 Mandibuzz is more hyped for PvP than for PvE. A poor ATK stat for gyms and raids leaves little use in PvE for this bird. Its respectable DEF and STA stats make it a decent defender for gyms, though Air Slash is probably recommended for that role due to common Fighting-type attackers. Better to use Mandibuzz for PvP, where it really shines.

Mandibuzz has been hyped ever since Gen 5 was announced for Pokemon Go, for various reasons. Its stat distribution features high bulk, while its moveset allows it to perform very similarly to Umbreon, another popular pick in the meta. Access to Flying typing and coverage gives Mandibuzz useful tools against common Grass and Fighting-types in the meta. As a Dark/Flying type, not taking Super Effective damage from Fighting-types while countering them with Flying-type attacks gives Mandibuzz an edge as a Dark-type. The loss of Sky Attack from the first Gen 5 datamine is unfortunate, but perhaps it's a reasonable nerf to keep Mandibuzz from breaking the meta.

Mandibuzz has a max CP of 2138, which is somewhat inadequate for Ultra League. Dark-typing resistances helps it win when at a typing advantage, though not always as reliably as other Pokemon with more appropriate stats for this league.

Can we please talk about the new updates?
Listen, if some big name youtuber uses MEMES to deal with sloppy shit that are most…
PVP2: Rare Movesets
So what pokemon do you use a very rare moveset on in pvp. For me its Gary + Outrage. …
PVP1: Debatable Movesets you have a hard time deciding on
So what are some Pokemon you have a hard time deciding between. For me there are 2…
Which regigigas to power up?
got a 15-14-14 shiny regigigas with Hidden Power Fire recently. don’t think I will…
Shadow Legendary IVs
Sooooooo i just used the Super-Radar i had rolled over to get an early Shadow Ho-oh…
Read More