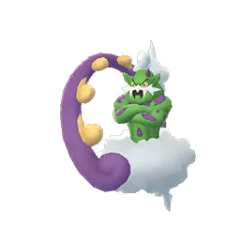 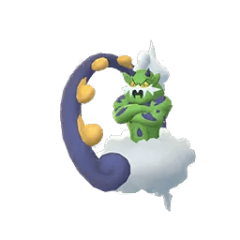 The first member of the Forces of Nature... exists. A very unspectacular moveset cripples its ability to compete against other Flying types, despite its respectable ATK stat. Beyond this, it would take a huge buff to Hurricane or some other form of rebalancing to let it top the Flying charts.

On the bright side; we finally get to see the Flying Type background!

Grass Knot is a strong charge move and covers Rock-type Pokemon that Tornadus is weak to, along with common Water Pokemon. Dark Pulse provides relatively neutral coverage against various meta picks across all three leagues, but can be particularly useful in formats such as Open Ultra League. Hurricane is quite strong with STAB, but has an expensive energy cost that Tornadus can't generate comfortably with its fast moves. For that reason, Hyper Beam is also not recommended.

Tornadus is not eligible for Great League due to its minimum CP being too high.

Tornadus is a mono-Flying type Pokemon with a high ATK stat and consequently poor bulk. Unfortunately its typing isn't very valuable in the Ultra League meta, where the only Pokemon it could possibly want to encounter are Fighting-types and the rare Grass Pokemon. Its cumbersome moveset also leaves much to be desired.

Despite its high offensive stat, Tornadus has poor performance in Master League, where not only does it have unimpressive bulk, but also a relatively vulnerable defensive typing and a sluggish moveset. Overall probably give this guy a pass.