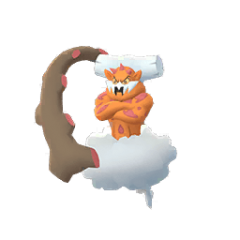 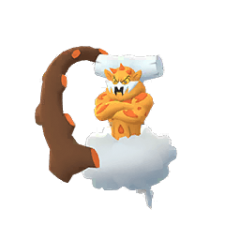 From the start of Pokemon Go, the CP calculation formula smiled on Landorus, and players have been preparing for its grand arrival for years.

....not this Landorus, the other one.

However, because Therian forme Landorus received a moveset nerf moments before its release, it is no longer much better than this Landorus as it was originally projected. Landorus-T is still the superior choice in most cases, but Landorus-I isn't too far off in performance. However, Landorus-I generally pales in comparison to Community Day Garchomp, who wins on accessibility, superior bulk, and much more relevant resistances.

Mud Shot provides incredible energy generation, though it doesn't offer much damage output despite getting STAB.

Rock Slide costs the least amount of energy, provides wide coverage, and is quite efficient stat-wise. Earth Power benefits from STAB and also offers wide relevant coverage against common typings. Outrage requires quite a bit of energy to use, but in certain PvP formats can be useful for surprising Dragon-types.

Landorus currently is not eligible in Great League due to its high CP. This might change in the future if it would be released in Research Breakthroughs, or through some other methods of obtaining it at a lower level.

Landorus struggles quite a bit in Ultra league due to its high ATK stat and consequently poor bulk. The lack of a relatively cheap charge move (energy-wise) can result in inconsistent performances against the meta, with various matchups won or lost based on its ability to reach its charge move in time. Access to Earth Power is valuable in countering common Steel-types in this league, while Outrage provides a difficult niche against Dragon-types if unshielded. While both charge moves together provide very relevant coverage in this league, their high energy costs discourages their use together, requiring Rock Slide to bait shields for smoother results.

Landorus's access to a fairly reliable, nigh unresisted charge move combination and decent overall stats makes it a strong contender in the Master League. It breaks Steel-types and simultaneously threatens the Flying-types that they are often paired with, making it a solid corebreaker. Its typing grants it useful resistances to Ground, Electric, and Fighting, allowing it to fend off Zacian (especially non Play Rough ones), and non Dragon Tail Groudon. This form of Landorus sets itself apart from its Therian counterpart with its more reliable and straightforward moveset, making it stronger in extended fights, but worse for hit and runs.

Landorus's frailty and reliance on charge move damage can lead it to struggle against shields despite Mud Shot's energy generation. Its stats are also nothing to write home about, and can be overwhelmed by strong neutral hits from the likes of Giratina and Mewtwo. Super-effective hits can pretty much just delete Landorus, so Kyogre, Mamoswine, and Palkia are huge threats. Landorus also faces stiff competition from its Therian forme due to the latter's much higher ATK stat and a moveset with a higher reward potential.