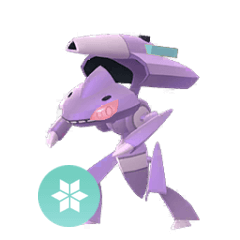 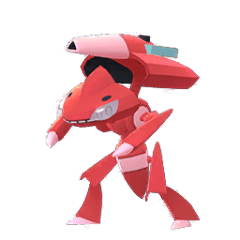 While Genesect - Chill Drive can do everything that the basic form of this prehistoric terminator can do, it also has the added power of an Ice-type Techno Blast. However, this move isn't worth anything per-say in the PvE meta, and Genesect is still best used as a Bug-type Attacker.

Fury Cutter is Genesect's only currently viable Fast Attack and provides it with impressive energy generation. Metal Claw is underpowered.

Techno Blast is Genesect's signature move and the primary reason to run the Pokemon to begin with, sporting an incredibly high DPE for its energy cost. X-scissor is Genesect's cheapest option and is great for baiting and finishing off weakened targets. Magnet Bomb is slightly more expensive, but it can improve Genesect's coverage against Fairy-type Pokemon. Its higher DPE may also make Genesect less reliant on Techno Blast.

Until Genesect-Chill is available as a research reward, its CP is too high to enter Great League.

A combination of a good defensive typing and an extremely powerful Ice-type damage in Techno Blast allows Genesect to cause some headaches against common Pokemon such as Giratina, Cresselia, and Trevenant. Genesect's bulk is nothing to write home about, however, due to its very Attack-leaning stat spread. Registeel's dominance in Ultra League threatens Genesect's viability - it not only counters Genesect, it's also a strongly competing Steel-type option for teams.

Ice-type damage is particularly devastating in Master League due to the metagame's centralization around Dragon-, Ground-, and Flying types, and Genesect gets to take advantage of that while not being crippled by the type's awful defensive profile! Genesect can fulfill a Steel-type role on teams by keeping certain Fairy- and Dragon-type Pokemon in check. Unlike Excadrill or Melmetal, it also lacks a weakness to Close Combat, which makes it a stronger buffer against Zacian. Armed with a powerful Techno Blast, Genesect can even break down traditional Steel-type counters such as Landorus-T, Giratina-O and Garchomp.

Despite these positives, it's always worth keeping in mind how frail Genesect is and how reliant it is on having a type advantage. Neutral strong hits can easily smash it apart. Unlike other Steel-type Pokemon, it does not have a positive matchup against either Dialga or Zacian, merely only being even against them. Finally, Genesect is prone to getting hard countered by common Pokemon such as Kyogre, Ho-Oh, and Melmetal, which may prove troublesome if Genesect is forced to be at a shield disadvantage to win a matchup.