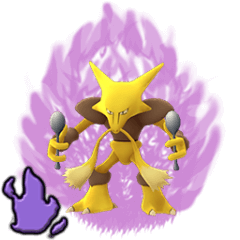 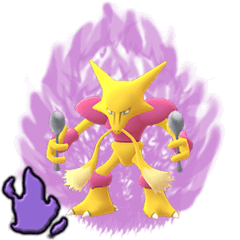 Shadow Alakazam sits on a very interesting and unstable throne. It technically has the highest Psychic Type DPS in the game with its legacy Psychic moveset generally speaking, surpassing even Deoxys-A and Psystrike Mewtwo, but its advantage over the later is so miniscule that it's not really worth raising unless you're desperate for a Psychic attacker due to just how much lower its TDO is. To say the least, it's a significant drop.

...and while Shadow Alakazam may look cool standing atop a gym, it's an atrocious defender due to how frail it is.

Counter is generally preferred for its superior damage output and wide relevant coverage, despite STAB and superior energy generation with Psycho Cut.

Fire Punch costs the least amount of energy, and can be used frequently. Psychic is a move that hits hard with STAB, but is limited by availability. Shadow Ball provides coverage against Alakazam's weakness to Ghost-types, in addition to relatively neutral coverage overall, but lacks STAB. The rest of Alakazam's charge moves cost too much energy to be viable; Alakazam will very likely faint by then.

Alakazam prior to its Community Day has seen zero use in PvP due to its extreme fragility, but the addition of Counter from CD and Fire Punch from the December 2019 rebalance gave it the tools it needed to compete in the meta. Access to Counter and Fire Punch enables valuable coverage against a large portion of the meta, in particular most Steel-types and a variety of Grass-types. Unfortunately Alakazam's very poor bulk causes it to perform quite badly in most matchups where it can't hit for Super Effective damage, which makes it more of a niche.

Poor bulk doesn't help Alakazam in Ultra League, where the ubiquitous Giratina becomes a major threat. Access to Shadow Ball is often inadequate due to Alakazam fainting before it can reach it with a prior shield bait. Wins against common Steel-types and certain other meta Pokemon gives Alakazam some play against the meta, but the reliance on very situational and specific matchups can result in difficulties to win consistently.

Alakazam has stats that are somewhat inferior when compared to the meta, especially DEF and STA stats. While it can win certain matchups against popular Pokemon, other Pokemon can fulfill its role with more consistent results.