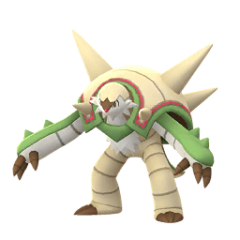 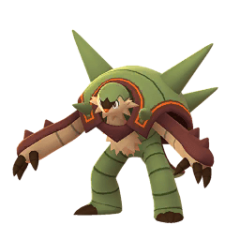 Chesnaught is the Kalos Grass-type starter in Gen 6, with an interesting Grass/Fighting typing. While it definitely looks cool and can be nostalgic among players who enjoyed playing Pokemon X and Y, its introduction into Pokemon Go is quite late meta-wise, as at this point of the game numerous Pokemon with superior stats and movesets have already been introduced. That doesn't mean Chesnaught is completely useless, it just won't be the best at what it does.

Vine Whip or Smack Down + Superpower and Energy Ball

Vine Whip is generally recommended for its significantly faster energy generation, as well as benefiting from STAB. Smack Down gives up faster energy gains for strong Rock-type damage, though it doesn't get STAB. Low Kick is a poor move.

Superpower is a very strong move in PvP, offering very high damage for its low energy cost, but is risky to use with its self-debuff. Energy Ball costs a moderately high amount of energy, but benefits from STAB to offer consistent damage. Gyro Ball requires more energy, lacks STAB, and its coverage isn't as useful. Solar Beam demands the most amount of energy, making it undesirable to use.

Chesnaught brings a new perspective into the Great League meta, with access to both Grass and Fighting-type coverage. While this isn't particularly unique, its moveset synergizes better than that of Gallade and competes with Sirfetch'd quite closely. Unfortunately Chesnaught's moveset is a bit difficult to use, as its cheapest charge move (energy-wise) is Superpower which risks its self-debuff, however using Energy Ball to bait shields is rather slow and inefficient. The likely more appropriate play is to stack 80 energy and throw double Superpower before switching out, but this play might forfeit switch advantage. Chesnaught's bulk is rather average in this league, but with a total of six weaknesses (notably being doubly weak to common Flying-types), Chesnaught might have a hard time standing out among existing popular picks.

Chesnaught's performance in Ultra League is similar to that of Great League. Its difficult and often inefficient moveset tends to hold it back, with various positive matchups flipping to losses if the opponent uses both shields, as Chesnaught will fall behind significantly if it can't KO the opponent after two Superpower debuffs. While the play of stacking two charge moves worth of energy and using them back to back and then switching out isn't uncommon, giving up switch advantage makes it less reliable compared to other options.

Chesnaught would appreciate additional stats for Master League, as it falls behind various legendary and pseudo-legendary Pokemon in this league. Common Dragon-types and Togekiss are major struggles for Chesnaught, while the fight against Gyarados can be quite difficult depending on circumstances of that battle. Unfortunately losses against Dialga and struggles against Shadow Snorlax, despite being a Fighting-type and having appropriate coverage, will cause Chesnaught to fall behind in the ranks.