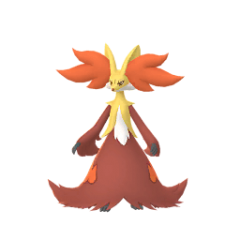 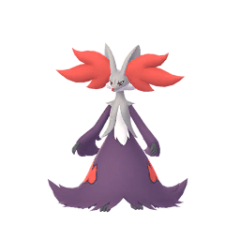 Delphox is the Kalos Fire-starter of Gen 6, being quite popular among players who enjoyed Pokemon X and Y. Unfortunately upon its introduction into Pokemon Go, numerous superior Fire-types and Psychic-types have already been released, which makes Delphox mostly a dex filler.

Fire Spin benefits from STAB and sports slightly above energy generation. Zen Headbutt gets STAB but its damage output and energy gains are terrible. Scratch doesn't get STAB nor can it be Super Effective, on top of also tying for the worst energy generation in the game.

Flame Charge isn't particularly powerful and costs a modest amount of energy, but guarantees a +1 self buff that can ramp up damage and pressure over time. Flamethrower is stronger, but costs slightly more energy and doesn't provide a self buff. Psychic is recommended for its Psychic-type coverage, and also gets STAB. Fire Blast demands too much energy to use.

Delphox sports an interesting Fire/Psychic typing, with high offensive stats and consequently poor bulk. Unfortunately its defensive typing doesn't synergize very well to cover their weaknesses, leaving this fox rather vulnerable against the meta. A relatively slow moveset and unimpressive energy generation holds Delphox back compared to the rest of the meta, even causing unexpected losses. Wins are largely against Grass-types and certain Steel-types, however struggles against Machamp, Shiftry, Meganium, and Melmetal (as well as other Pokemon) given a typing advantage makes it difficult to justify its use.

Common usage of Grass, Steel, Bug, and Fairy Pokemon in this league gives Delphox various favorable matchups. Outside of matchups with typing advantages, Delphox tends to struggle against the rest of the meta, for similar reasons that plagued it in Great League.

Delphox would appreciate more stats in Master League, trailing behind various legendaries and pseudo-legendaries. Unfortunately its slow moveset and fragile bulk result in mostly wins against Steel-types, and losses against most of the rest of the meta. Difficulties against Mamoswine, Togekiss, and Magnezone are discouraging for Delphox, and it's likely a moveset upgrade will be needed to see more play out of this fox.