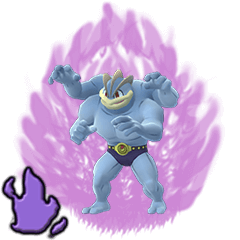 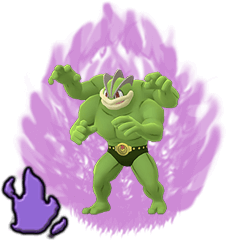 The July of 2020 Team Rocket Takeover saw the release of Shadow Machamp, bringing the champ back to the absolute top spot of Fighting Types. If you're lucky enough to obtain one with worthwhile stats, it is easily one of the most pervasively powerful Pokemon in the game, combining huge effective attack, outstanding moves, and one of the best offensive typings in the game.

Counter is one of the best fast moves in the game, provides wide relevant coverage, and benefits from STAB.

Cross Chop costs the least amount of energy, gets STAB, and can be used frequently. Close Combat is more complicated to use as a self-debuffing move, but can also be quite devastating if unshielded. Rock Slide is preferable for its lesser 45 energy cost, and offers valuable coverage, including against Machamp's weakness to Flying-types. Dynamic Punch is statistically inferior to Close Combat in damage output and costs 5 additional energy, however it doesn't carry the self-debuff risk. Payback is a move limited to Elite TMs and Community Day events; while it provides strong coverage against Machamp's disadvantages vs Psychic and Ghost Pokemon, its high 60 energy cost discourages its use, especially when shields are available.

Machamp's access to fast and relevant coverage against a large portion of the meta can make it very threatening. With a 20% bonus to its ATK, Shadow Machamp trades bulk for more powerful offense, with win conditions against Pokemon like Altaria and Azumarill that have advantages against Machamp. However against Pokemon with high damage output or faster movesets, Shadow Machamp may end up fainting more quickly.

In Ultra, Machamp’s raw power and speed makes it a valuable addition as a Steel counter, though it gets walled pretty hard by Ghost, Psychic, and Fairy Pokemon. It should also be noted that Shadow Machamp's higher ATK gives it more play against a few Pokemon in this league, with wins against most meta picks that don't have typing advantages over Shadow Machamp.

Machamp is...okay...in Master League. The obvious assumption is that you'd bring it out to handle Dialga, but it can't even consistently win that matchup, barely dying in the 2shield to Dragon Breaths. You do certainly stomp out Melmetal and Snorlax, which is nice. However, you get shredded by Togekiss and Mewtwo, can barely touch the Giratinas, and even lose to Kyogre just by getting outbulked. There are worse picks, certainly, but there are also better ones.

Machop Confirmed to be the Community Day Pokemon for January 2021