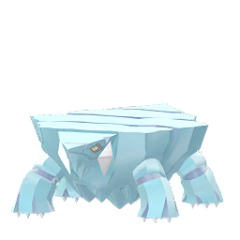 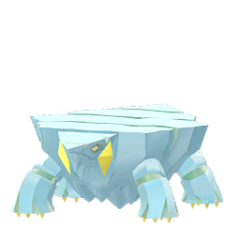 Avalugg wants so badly to be a good Pokemon in Gym Defense. It's got the stats and the moveset to be great, but that mono-Ice typing hurts it badly! Weaknesses to Fighting, Steel, Rock, and Fire make it very vulnerable to many of the top damage-dealers in the game, and its lone resistance to Ice doesn't help a whole lot. Honestly, its best place is between two 2x Ice weak Pokemon, and that's about it.

What? How does it do in raids? Are you kidding me? Do you really want to use an iceberg, a monolithic object noted for being slow-moving, in a mode where speed is the most important metric?

Ice Fang is superior to Bite due to STAB and higher energy generation. Ice is an excellent offensive type and dealing consistent Ice-type damage is the reason you use Avalugg.

Body Slam is necessary due to its low cost, making up for Ice Fang's low energy generation and providing coverage against Fire, Ice, and Water-types. Avalanche is one of the best charge moves in the game, coming at a moderate energy cost with a very high DPE of 2.0 (2.4 with STAB). Earthquake can be used over Avalanche as Avalugg's only way of threatening Steel-type Pokemon, although its heavy energy cost makes it extremely unreliable. Crunch is largely an outclassed option, as a neutral Avalanche is pretty much as strong as a super effective Crunch, but it can be useful for hitting Metagross, and the potential Defense drop helps make Ice Fang deadlier. Mirror Coat offers no practical use and should be avoided at all costs.

Avalugg possesses good overall stats, but suffers greatly from competition with other Ice-type Pokemon who either have a better moveset, better resistances, or both. Pokemon such as Alolan Ninetales, Abomasnow, Lapras, or Community Day Walrein should be considered first before thinking about Avalugg. Being a pure Ice-type also somewhat ruins Avalugg's good bulk, as it only resists Ice, while being weak to numerous common types. Since it does have good stats and an acceptable moveset, Avalugg can potentially shine in a Great League cup.

For the same reasons as Great League, Avalugg once again does not stand out very well in the Ultra League. The aforementioned Ice-type competition can all reach 2500 CP, leaving Avalugg to chill at the benches again.

No longer shackled down by the CP limit, Avalugg can finally prove its worth as a threat as its stats tower above almost every other Ice-type Pokemon in the game. Avalugg's max CP may not reach the heights of many Legendary Pokemon, but its stat product is competent, being higher than the very dominant Togekiss. Avalugg's offensive prowess further shines due to Ice-type damage being especially potent in Master League thanks to the abundance of Ground-, Flying-, and Dragon-type Pokemon. It is not uncommon to see Master League teams and cores sporting multiple Ice weak Pokemon, and Avalugg will be quite pleased to snack on those. However, that may change if Avalugg becomes common enough to force teams to adapt.

Avalugg's competition is quite scarce, with Mamoswine being the most notable other Ice-type option (or the rare Regice). Mamoswine offers greater power and a superior ability to crack down Steel-types with Bulldoze. However, it is very fragile and may sometimes be unreliable. Avalugg's bulk makes it less shield demanding, and Ice Fang's pressure ensures that it can comfortably win every match up where it has a type advantage. However, without Earthquake, it is hopelessly walled by Metagross and Melmetal, and Ice Fang's low energy generation makes it a rather inflexible Pokemon.

Charmers in GL and how to counter them?
Charmers really break my whole Great League team, as they keep on winning against me…
Sableye in GL
I have one available to use. Does anyone have experience of using one? How has it been…
Shadow legendary
Hi! Is there any chance to get shadow raikou,shadow moltress, shadow entei in future?…
Shadow Magnezone changed :( why?
Shadow Magnezone used to look like this: Like an angry, scary, bright red light. The…
Adjusting IVs and Hyper Training
If we were allowed to adjust IVs of a certain Pokémon, then it would be so much easier…
Read More