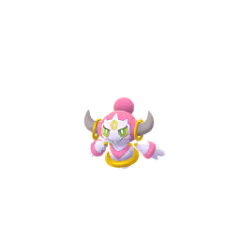 Hoopa, one of the Mythical Pokemon of Generation 6/Kalos, came to us as the star of the Season of Mischief, and took its place in the meta as.... yet another random Mythical Pokemon. It's capable of acting as a Psychic attacker, and as a Ghost attacker it.... exists.... but at the end of the day it's little more than a box-filler.

In the main series, this variant of Hoopa has a Psychic Type signature moved named Hyperspace Hole, but it's unlikely to make huge waves when/if it's released.

Psychic is a direct upgrade over Psybeam in every aspect, therefore the latter is completely useless. Shadow Ball provides useful coverage against Ghost-types, as well as being largely unresisted against most Pokemon.

Hoopa performs poorly in Great League for two primary reasons: its high ATK stat results in fragile bulk, and its slow moveset causes it to fall behind most meta Pokemon. To add insult to injury, there's already competitive Psychic-types in the meta like Hypno and Cresselia who perform much better. Fun fact though: Hoopa can KO a Toxicroak in just 3 Confusions.

The same problems that Hoopa suffers from in Great League drag it down in Ultra League. Wins against Fighting-types are to be expected, but most other meta Pokemon become a challenge for Hoopa. Wins against Deoxys-Defense and Armored Mewtwo are attributed to Hoopa's access to Shadow Ball, while the fight against Gengar is a loss due to animation speed (since Confusion is so slow). Cresselia and Lugia also beat Hoopa despite being weak to Shadow Ball, due to them outspeeding Hoopa and landing their Charge Moves before Hoopa can land Shadow Ball in any even-shielding scenario. Overall it's probably best to pass on this Pokemon if you're serious about winning consistently.

Hoopa's slow moveset renders it unviable for Master League. Its fragile bulk is also very underwhelming when compared to the meta in Master League.

Go battle league reward Driftblim with 8/7/0 IV
Hello everyone, I thought that the minimum threshold IVs for a pokemon reward from go…
Help me pick my GBL team
It’s season 9 of GBL and I finally decided to not only check for high IV mons but also…
Too Weak to Raid?
I have just started getting into Pokemon GO, having reached level 27 and starting to…
Pokemon Lvl / IV question
Hi! Im fairly new to Pokemon go. Have been playing for a month or so now. Trying to…
Lugia not having Aeroblast
I caught these three yesterday and none of them had Aeroblast, they were all…
Read More