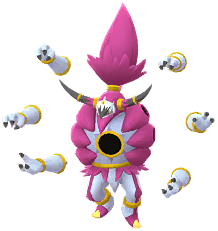 Hoopa Unbound possesses an absolutely massive 311 base Attack stat, surpassing even that of Mewtwo. However, its performance in raids is merely good instead of top tier. As a Psychic-type attacker, it trails slightly behind Mewtwo in DPS, as it doesn't have access to Mewtwo's devastating Psystrike. Furthermore, its Dark secondary typing removes the useful Fighting-type resistance. As a Ghost/Dark-type attacker, it is held back by Astonish's poor parameters, and Dark Pulse being only as good as its unSTABed Shadow Ball.

All hope is not lost for Hoopa Unbound however. Its Psychic/Dark typing provides it with near immunity levels of Psychic resistance, giving it an incredible staying power against some Psychic bosses. Furthermore, Hoopa Unbound's signature move, Hyperspace Fury, is currently in the game's move list. While we don't know its stats yet, Niantic has often been generous when it comes to signature moves. If the move is at least as strong as Shadow Ball, it will immediately propel Hoopa Unbound to a top tier attacker even with Astonish's underwhelming parameters.

Basically, Hoopa Unbound is a solid choice for an attacker, just not quite top class YET.

Confusion is the superior fast move simply by having far better parameters than Astonish.

Dark Pulse is Hoopa Unbound's cheapest charge move and benefits from STAB. Psychic is a powerful STAB move, although it doesn't provide much additional coverage. Shadow Ball is a great move, but its coverage is largely redundant with Dark Pulse around, and Psychic covers for Fairy types anyways.

Upon changing forms, Hoopa Unbound's CP is now too high to participate in Great League.

Hoopa Unbound's stats are so offensively skewed that it finds itself having roughly comparable bulk to Gengar. Unlike Gengar, however, Hoopa Unbound only has one resistance to cover for it. Its moveset is also far more clunky. Although Hoopa Unbound's weaknesses are few, most neutral hits should just about take it down.

Hoopa Unbound has pretty alright stats in the Master League, now that there's no CP cap to punish its offensively skewed stats. It's still a really fragile Pokemon that lacks resistances, however. It can impressively facetank Mewtwo's Psystrike, but just about any other charge move will deal heavy damage to it. Its current moveset is too clunky to leave much of an impact, and really doesn't win any matchups. It may find a niche if Hyperspace Fury is granted good enough parameters, but until then, don't expect much from it.

Mischief Unbound: The Finale of the Season of Mischief