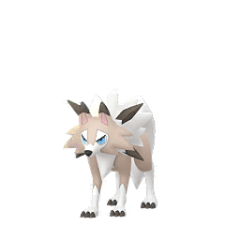 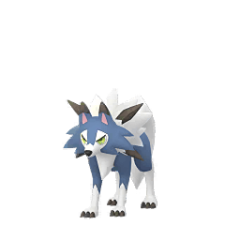 Lycanroc Midday Form is even more fragile than its Midnight Form, but boasts slightly more ATK and thus more DPS. Unfortunately its performance still falls behind that of Aerodactyl, which discourages its use beyond being a Dex filler.

Rock Throw is generally recommended for its strong STAB damage, though its energy gains are below average. Sucker Punch could be chosen for slightly faster energy generation, but its damage output is quite poor without a damage multiplier.

Drill Run is a Ground-type move that pairs well with Rock-type moves to offer perfect coverage, and is overall a very solid move. Crunch should be chosen in this specific moveset due to its lesser energy cost than Stone Edge, as well as offering another typing coverage option.

Lycanroc's Midday Form is unfortunately worse than its Midnight Form due to the lack of access to the Fast Move Counter. This version of Lycanroc has even worse bulk unfortunately, approaching the squishiness of Gengar. The pairing of Drill Run and Stone Edge is very solid, but without fast energy generation to access these strong moves, Lycanroc will quickly faint before it can apply enough shield pressure.

Lycanroc's performance in Ultra League isn't much different from Great League, and it is generally advised to consider other Pokemon instead.

Despite benefiting from a slightly higher ATK stat in this league compared to its Midnight Form, Lycanroc performs poorly in this league primarily due to its very fragile bulk and vulnerable typing.