Community Posts with Keyword Golem All 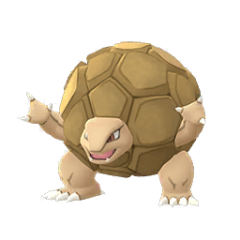 Golem was once well known as a legendary bird killer, preying on their pervasive Rock-type weakness. It benefits from strong stats, excellent moves, and a specialized typing. Golem has now fallen from grace, as its fate was sealed by the release of Smack Down Tyranitar, relegating its fate to little more than a small niche as a tank counter against Zapdos when and if it returns. Still, many long-term players probably still have this Pokemon sitting in their box, remembering a time when it was one of the most important Pokemon in the game for raids.

On defense, Golem has some hard-hitting attacks, but a pair of crippling weaknesses to Grass and Water-types severely hamstring its performance.

If you're lucky enough to have a legacy Golem, this is its best moveset. Mud Shot is valuable for its fast energy generation and cannot be obtained with Elite TMs.

The nerf to Ancient Power following the April 2020 rebalance makes it no longer viable, and Rock Blast is now recommended instead for its cheaper energy cost. Earthquake rounds out Golem's moveset, giving it a valuable Ground type STAB to take own most of what it's intended to counter. Stone Edge hits hard with STAB, and may be preferable in very specific formats.

The only reason this moveset is here is to make note of the best moveset that Golem can muster without its legacy move. Mud Slap and Rock Throw both offer poor energy generation but strong STAB damage output; either can be chosen depending on the coverage needed.

Golem is generally bulky thanks to its high defense, and has STAB on both Rock and Ground type moves, making it very solid offensively. It's generally well-rounded (no pun intended), but it has two obvious issues: Grass and Water types. These are both very common types for Pokemon and/or coverage, meaning Golem is in constant risk of being taken out before it can do anything meaningful, and could only really shine in a restricted Silph Arena format or specific GBL format. The other big problem with Golem is the fact that it needs a legacy fast move to be truly useful. Play Golem to its strengths, and get the heck away from its weaknesses.

Pretty much the same story as the Great League, but with Water and Grass getting a bit less common here, while Fire and Steel get more relevance, Golem shines more with its legacy set. Its quick Earthquake also does impressive damage to Giratina, making it one of the few off-meta pokemon that hold its own against both that and Registeel. Swampert, however, does most of the same and handily beats Golem.

Here it still threatens the big Steel-types, but we have superior Ground options in the likes of Swampert and Rhyperior.