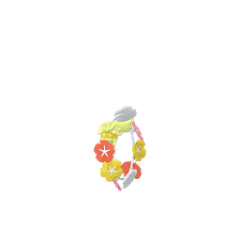 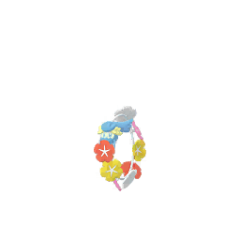 Aloha from Hawaii! That's where you can find this Pokemon in Pokemon Go, making it a rare regional exclusive. Fortunately, it has no use in the meta, so a mere Dex entry is good enough if you can manage to get one.

Comfey has no viable movesets, but Vine Whip can still be used to generate energy decently fast. The unpredictable typing of Hidden Power can catch unsuspecting opponents off guard, but you can only fool your opponent once. In addition, Hidden Power can't be Fairy-type, which means no STAB.

Grass Knot costs the least amount of energy, though still moderately expensive, and synergizes well to threaten common Water-types. Draining Kiss benefits from STAB and offers Fairy typing coverage, but its damage output is poor for its unappealing energy cost. Petal Blizzard demands too much energy.

Comfey has surprisingly decent bulk thanks to its high DEF stat, and is a mono-Fairy type Pokemon. Unfortunately its moveset is next to garbage for its role, and is the main drawback to its performance. The lack of STAB Fast Move options, in addition to costly Charge Moves that don't provide meaningful typing coverage for Comfey is very unfortunate. The one benefit of having such a terrible moveset is that it's not a must-have Pokemon in the meta, which is nice because this Pokemon is only accessible in Hawaii.

An actual Grass-type Pokemon would be more viable for Comfey's role due to STAB. With a max CP of 2392 at level 50, Comfey is also a very costly Pokemon to power up for this league, which even further discourages its use.