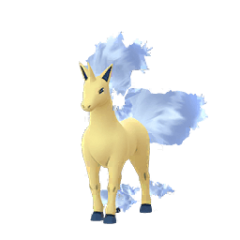 Rapidash looks cool, but its performance sure isn’t. Though it has access to Fire Spin, it doesn’t learn Overheat, making it totally meta-irrelevant. It’s just another Fire-type in a crowd of better Fire-types.

Drill Run is recommended for its wide coverage, efficient 1.78 DPE (Damage Per Energy), and costs the least amount of energy among Rapidash's charge moves. Flame Charge demands less energy than other charge move options, and while it's not as powerful, it still provides a guaranteed +1 ATK self buff. Fire Blast and Heat Wave both cost too much energy to be worthwhile.

Rapidash sports a mono-Fire typing with high ATK stats and consequently poor bulk. Access to Drill Run lets it stand out from other Fire-type Pokemon, providing valuable coverage, though somewhat redundant against Steel Pokemon. Incinerate is a double-edged sword, improving energy generation stat-wise on paper, but the delay of lasting 5 turns (the longest of any fast move at the time of its introduction) can result in inconsistencies when charge moves or Pokemon switches occur. Losses against Pokemon with high damage output (such as Dragon Breath users) are largely due to Rapidash's fragility, while ubiquitous Water Pokemon will always be an issue.

Rapidash has a max CP of 2461, which just barely reaches the CP cap of Ultra League. Unfortunately the lack of bulk stats remain the primary reason for various losses, and while Fire-typing is favorable against Grass, Bug, Steel, and Fairy Pokemon (many of which are common in this League), it does have its shortfalls against common Water-types and Pokemon with superior stats and/or faster movesets.

There are shameless brags for Pokémon how about you post pics of your favorite pokestop? Post the Funniest or coolest below
Post the best pokestops you can find!! Whether they are hilarious absurd or just…
Returning player lost in pvp
Hello there ! I’ve just gotten back into pogo, and i’m lost with pvp IV and pokemon…
Shinx Community Day
Looks almost certain according to Leekduck, the move will doubtless be a PvP one…
Yamask / Cofagrius ... will it live up to the hype?
I wanted to ask the PVP gurus out there if they think Yamask / Cofagrius will live up…
1500 and below or above Empoleon
So I have enough candy to evolve my 3 star 439 Piplup… should I evolve it and have a…
Read More