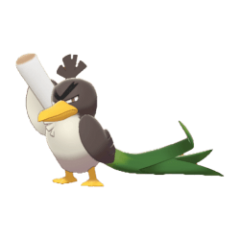 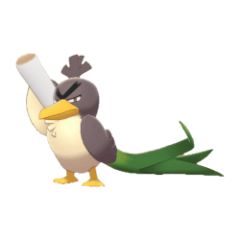 Galarian Farfetch'd is in a very awkward place. It shares the same DEX number and species with a regional Pokemon, yet it has not had any sort of regional restriction since its release. It's also unable to evolve currently, despite having an evolution in the main series that should be attainable in Pokemon Go for all intents and purposes. For now, it's best to try to catch a few good individuals when it's available (and some for PvP too!), and then forget about it until Sirfetch'd is released.... eventually.

Fury Cutter doesn't get STAB, but its fast energy generation helps make use of its charge moves much sooner. Rock Smash is a pretty bad move even with STAB, and has pitiful energy gains.

Leaf Blade the best charge move available, ties for the least amount of energy needed among the charge moves of Galarian Farfetch'd, and has a very high 2.0 DPE rating (Damage Per Energy). Brave Bird offers a good coverage option, though it's not the most impressive move in the game. Brick Break generally speaking is a very bad move due to its pathetic damage output, but the addition of STAB helps to make it less awful, and at the very least it can be spammed frequently.

Galarian Farfetch'd features a different typing compared to its Kantonian cousin, but fragile bulk and a somewhat lackluster moveset leaves more to be desired. The options of Brave Bird and Brick Break are quite mediocre as coverage choices and Galarian Farfetch'd can't make it to the top of the meta without better moves. At the very least, this bird stands out for its very fast access to Leaf Blade without sharing the typing strengths and weaknesses of Grass Pokemon.

With a max CP of 1674, this bird won't be seeing any real action outside of Great League.

Galarian Farfetch'd may look tough, but with those pathetic stats and a juicy leek, it may as well be the best tasting dinner for Pokemon in this league.

Shadow vs Regular XL Candy Priority
Just wondering if people are prioritizing their best Shadow or Regular mon when they…
Ice Pig problem
I got a 14-14-15 shadow ice pig but I have limited candy. Do I purify? 11…
What a day
Anybody else in? That was great! Better than the last 38 community days. A new…
Bottle Caps/Rocket Gas
So on the topic of bottle caps… As this IV improving mechanic was introduced in…
Xerneas is the worst legendary ever in GO and both GF and Niantic are there to blame
I don’t know about this. But thanks for ruining a COVER LEGENDARY by making a…
Read More