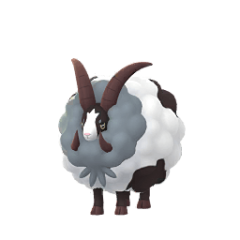 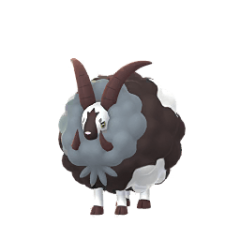 Double Kick enables Dubwool to compete in the meta thanks to its valuable energy generation and useful typing coverage. Tackle and Take Down benefit from STAB but can't be Super Effective against anything.

Body Slam can be spammed frequently and deal solid neutral damage with STAB. Wild Charge is a very threatening move, especially against common Water Pokemon, and gives Dubwool a lot of shield pressure. Payback is undesirable due to its high energy cost, but its Dark-type coverage is useful in specific formats.

The addition of Double Kick following the Sept 2022 update to Go Battle League is what enables Duwbool to see play in PvP. Access to frequently Body Slams and the threat of Wild Charge gives Dubwool some nice tools to pressure its opponents. Most notably Duwool competes closely with Vigoroth, but loses to its counterpart as Vigoroth has more damage with Counter. By comparison, Dubwool sports slightly more bulk and faster energy generation, with a different coverage option than Vigoroth's Bulldoze.

With Candy XL Dubwool can just about reach the CP cap of Ultra League, giving it some merit here. Payback is more favorable in UL due to the presence of Giratina, though Dubwool will faint before it can land 2 Paybacks on Giratina in an even fight. Against the rest of the meta, Dubwool mostly struggles with opponents who have access to its only weakness: Fighting-type, which there are a surprisingly large number of.

This goat ain't gonna be the GOAT unless it can get some more stats.

Raid Glitch Charge Attack
I was about to beat a Tapu Koko RAID and strangely I get a MEGA Boast ATTACK on ROCK …
Raid Charge Attack Glitch
(topic deleted by author) 1 post - 1 participant Read full…
Update Glitch
Has anyone been experiencing any kind of problems with the new update lately? …
Raid Glitch
Has any experience any issues in raids? Am experiencing some kind of glitch in the…
Elite move after evolution
Hi! First post on the forum :P. I have a question that have not been able to find an…
Read More