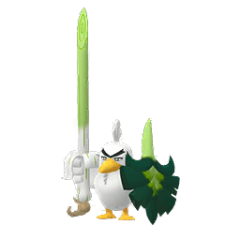 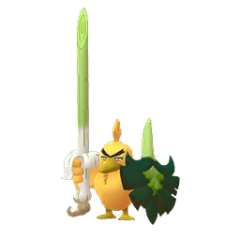 Honorable and true, Sirknight is the shining beacon of Pokemon Go, wielding its shining leek and leaf shield in a battle against all Dark Types that stand against it!

...that said, it's not exactly a good Pokemon in PvE. Just use Machamp or Conkeldurr.

Counter is generally the more preferred fast move due to its superior STAB damage and relevant coverage. Fury Cutter generates energy slightly faster, but not dealing as much damage makes it a downgrade in many cases.

Leaf Blade is one of the most efficient charge moves in the game, costs the least amount of energy, and can be used frequently. Close Combat takes advantage of STAB to threaten massive damage, though its self-debuff makes it difficult to use. Night Slash may offer valuable coverage depending on the format you play in, but its damage output is not very impressive. Brave Bird costs the most amount of energy and is not a good move compared to other options.

Access to a considerably better moveset compared to its pre-evolution gives Sirfetch'd considerable damage output in this league, with a high ATK stat, and relevant coverage against popular picks. Unfortunately the shield that Sirfetch'd holds on to doesn't help to mitigate its very fragile bulk. This bird hits hard and can sweep teams if given a major advantage, but can also just as easily struggle when in a bad position.

The high offensive potential and coverage available from Sirfetch'd is incredibly valuable in Ultra League, being able to outpace various meta picks and hit even neutral fights for high damage. Being only walled by Fairy, Ghost, and Psychic-types (which to be fair are still quite common), Sirfetch'd stands to challenge much of the meta in a big way.

Sirfetch'd would appreciate more stats for Master League, maxing out at only 2985 CP. However its typing and coverage still gives it some play against popular picks like Dialga and Snorlax, though other Pokemon can fulfill its role more comfortably.