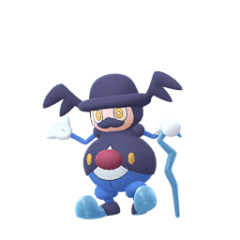 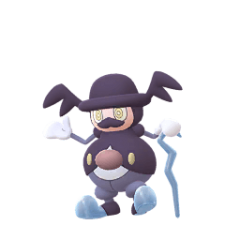 Mr. Rime was initially released through a special ticketed event, making it somewhat limited in terms of accessibility. With only 212 ATK, Mr. Rime falls behind other Pokemon in terms of stats, making it a downgrade when compared to other existing options. A total of 6 weaknesses and only 2 resistances makes it a poor choice for gym defense.

Confusion sports superior damage output, while Ice Shard offers faster energy gains. Either can be chosen depending on coverage preferred.

Icy Wind is valued for its debuff mechanic, though it's not the most powerful or efficient charged move. Ice Punch costs the least amount of energy and can be used to pressure shields sooner, while Psychic demands more energy but offers Psychic-type coverage. Psybeam is a poor move for PvP.

Mr. Rime features a high offensive stat and a very vulnerable Ice/Psychic typing. A total of 6 weaknesses and only 2 resistances is quite concerning, and makes Mr. Rime a risky choice in the meta. Powerful STAB coverage with Psychic and Ice-type moves gives Mr. Rime wide coverage, while access to Icy Wind helps to prolong its survivability in battles, as well as to annoy the opponent. Overall Mr. Rime fulfills more of a niche than a meta use, and is more likely to see success in specific formats than open Great League.

Strong damage output and valuable coverage gives Mr. Rime some play in Ultra League, more so in Premier Cup than open UL due to losses against Registeel and Giratina, as well as struggles vs Cresselia. Just like in Great League, access to Icy Wind is quite useful for harassing the opponent, though various matchups are dependent on landing Psychic which may lead to consistency problems. Mr. Rime's 6 typing weaknesses should also be noted, as many of them are common in this league.

Mr. Rime would appreciate additional stats to compete in Master League, with various legendary and pseudo-legendaries in this league who boast superior stats. Its typing vulnerabilities and somewhat slow moveset also hold it back from challenging the meta.