Community Posts with Keyword Muk All 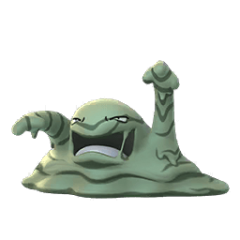 Smell that? That’s the scent of great gym defender decaying with each legendary released. For the longest time, the best answer to Muk was Dragonite. Frail Psychic-types couldn’t handle the combination of Infestation and Dark Pulse, and Ground-types were so slow that neutral attackers would get the job done faster. The release of Lugia, an extremely bulky Psychic-type, posed the first real threat to Muk’s viability. With Mewtwo and Groudon out, Muk has become yesterday's news.

While Muk is no longer an upper tier gym defender, it is still a very good gym defender. Its Poison-typing walls any Machamp trying to plow through.

Poison Jab is recommended for its STAB damage output and above-average energy generation.

Muk is a mono-Poison type with respectable bulk. Updates to its movepool throughout rebalances in 2019 have improved Muk's performance in the meta, with Thunder Punch being a valuable asset against common Water and Flying picks, while Dark Pulse and Acid Spray provide accessible options compared to Muk's more expensive charge moves. Unfortunately Poison-typing isn't very useful in the meta partly due to the frequency of Steel-types, and Ground-type coverage is quite common among various meta Pokemon.

As a Poison-type, Muk is mostly a niche pick to counter certain Pokemon like Fairy-types and Virizion. Ubiquitous Steel-types in this league makes it difficult to justify Muk as a pick on the roster, while access to Dark Pulse is inadequate when dealing with bulky Psychic-types.

With a max CP of 2757, Muk lacks sufficient stats to perform well in Master League.