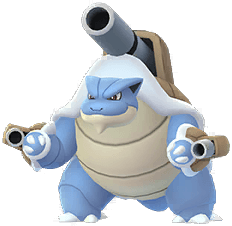 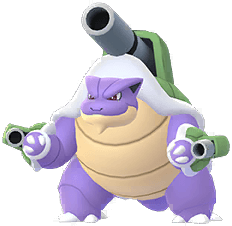 The first Water-type Mega Pokemon introduced in Pokemon Go, Blastoise brings the big guns to any determined player's team. While it's not the strongest Water-type, the boost that Mega Blastoise provides to raid attackers is highly valuable. And yes, Blastoise with sunglasses from its Community Day can mega evolve! Though the glasses disappear while it's mega evolved....

In terms of actual viability, Mega Blastoise is very bulky, meaning it will be able to stay on the field and provide its mega boost to other Pokemon for a fairly long time. In larger groups in particular, this can make bulky Mega Evolutions more effective than high-DPS options due to the sheer power that it grants the entire team.

Water Gun performs better than Bite and also gets STAB.

Behold, one the best charge moves in the game: Hydro Cannon. This is the main highlight of Blastoise, and is almost mandatory if you want Blastoise to perform at its peak potential. Hydro Pump is a lot slower and less efficient in comparison; if you're gonna use Blastoise then trade for one with Hydro Cannon, use an Elite TM, or don't use Blastoise at all.

Ice Beam should be the second charge move for Blastoise as it provides meaningful coverage. Flash Cannon can hit hard, but with a 65 energy cost it's quite slow and doesn't really complement Blastoise anyways. Skull Bash can surprise opponents for major neutral damage, along with a guarenteed DEF buff, but costs the most energy to access.