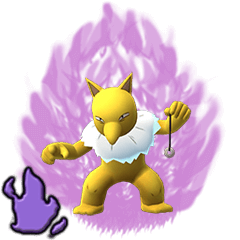 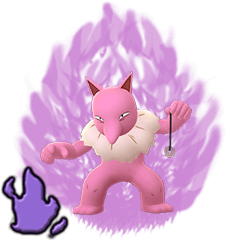 Though its lackluster ATK precludes it from any kind of attacking role, Hypno’s DEF, HP, and moveset are well tailored to the role of gym defender. Access to the optimal Confusion / Future Sight offer general STAB use, but its other charge moves provide great counter coverage, so Ghost or Dark-type counters may be taken by surprise.

Do note, Shadow Ball and Focus Blast have fairly late damage windows and thus are more exploitable. If you have spare Hypno lying around, feel free to throw one into a gym, but there are more efficient tanks to be investing Stardust in than this one.

Confusion is the superior fast move, and offers good damage output with STAB. Zen Headbutt is terrible for PvP.

Shadow Ball offers mostly neutral coverage, and can retaliate against Hypno's weakness to Ghost-types. Despite its moderately high energy cost, Hypno's excellent bulk gives it the time it needs to generate that energy. Focus Blast provides wide coverage against common typings, including Hypno's weakness to Dark-types, and deals considerable damage if unshielded. Its very high energy cost is somewhat discouraging though.

Hypno has very diverse options for coverage in its moveset, and any combination of these are viable depending on your team and any coverage needed. Fire Punch is useful for its coverage against popular Steel-types, in addition to Grass. Ice Punch hurts common Dragons, Grass, and Flying-types. Thunder Punch is valuable against ubiquitous Water-types and certain Flying-types. Electing for two elemental punches can be viable, or Shadow Ball or Focus Blast can be mixed in with one of the punches if coverage is needed.

What about Psyshock* and Psychic?

Psyshock is a legacy move that costs less energy to use while dealing less damage, while Psychic is the opposite. The former is generally more preferable due to easier accessibility energy-wise, but the latter can also be viable. However Confusion in general provides a lot of Psychic-type damage with STAB as-is, therefore it's not usually recommended to choose these two charge moves unless absolutely necessary, due to the potential coverage sacrificed.