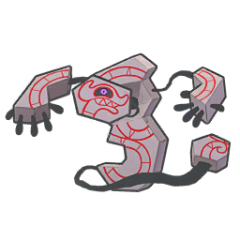 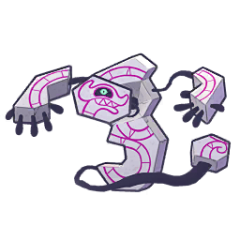 Such an amazing design, such wasted potential. Runerigus was never going to make waves in the PvE meta; its attack stat is just too low. However, while it was once dead-weight in PvP, the addition of Shadow Claw to its moveset in Go Battle League Season 12 has made it a worthwhile Pokemon in PvP.

Shadow Claw is absolutely required for optimal performance, with a strong combination of damage output and energy generation. Astonish is a significant downgrade.

Shadow Ball takes advantage of STAB to threaten major damage that's largely unresisted. Sand Tomb is recommended for its lesser energy cost and DEF debuff on the opponent, making it useful for baiting shields. However its damage output is pathetic if unshielded. Rock Tomb is a pretty poor move, and is only viable in specific formats where Rock-type damage is highly valued.

The addition of Shadow Claw following the Sept 2022 update to Go Battle League is a significant improvement for Runegrigus, giving it much stronger damage output and even more energy generation. Runegrigus sports decent stats for Great League with respectable bulk, debuff utility, and potential bait-and-nuke plays. Unfortunately its Ghost/Ground typing isn't very complimentary, and weaknesses to common typings hold it back from literally going from zero to hero.

Runerigus would appreciate more stats for Ultra League, with a max CP of only 2273. Much like in Great League, its role in Ultra League is niche at best, with very specific Pokemon in the meta that it can claim wins over.

Runerigus has both Sand Tomb and Rock Tomb, one for when it first faints, and the other for when its trainer rage quits.