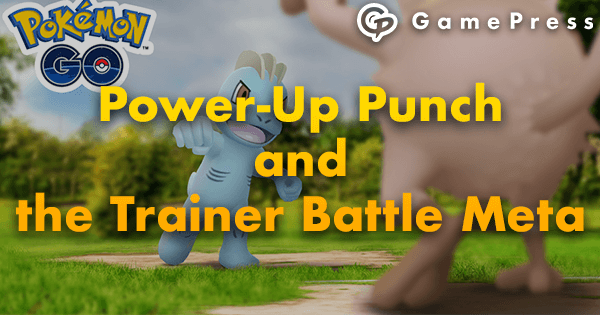 In celebration of Pokemon GO’s Battle Showdown event, select Pokemon are now able to learn the special Fighting-type charge move Power-Up Punch. While Power-Up Punch doesn’t look like anything special in raid/gyming content, in PvP it has the added bonus of powering up your Pokemon’s attack stat by 1 stage (stackable up to 4). This has players wondering just how useful it is in PvP, and to be blunt, it’s pretty broken as is.

The article below goes over Power-Up Punch’s stats and the best Pokemon to utilize it in Trainer Battles.

If you’d like an audio version of this info, check out this video.

Power-Up Punch is a 35 energy cost charge move that deals 40 damage in PvP and has a 100% attack boost rate. Every time you use it your Pokemon’s attack stat will go up by 1 stage, even if your opponent shields the attack. These stages stack up to 4 times, going up by x1.25 with each boost (1.25, 1.5, 1.75, 2.0). To give you an idea of how powerful this is, the same type ability bonus (so a Water-type using a Water-type attack and so forth) is x1.2 and super effective damage is x1.6. This means that after 2 Power-Up Punches, your Pokemon is effectively hitting all neutral opponents as if they were typed weak to your hits.

Despite having a dramatic 2 stage boost to both attack and defense, the attacks Ominous Wind, Silver Wind, and Ancient Power aren’t nearly as insane as Power-Up Punch is. This is because Power-Up Punch has a very low energy cost of 35, will boost the Pokemon’s attack 100% of the time, and has been distributed to three Pokemon that are already meta-relevant (Medicham, Lucario, and Poliwrath). On the flip side, the former three attacks have a 40-45 energy cost, an unreliable 10% chance to happen, and are distributed to meta-weak Pokemon (sans Giratina-A, the master of the Ultra League).

In short, Power-Up Punch hits fast, boosts always, and has been given to Pokemon that already work well in trainer battles. The other three boosting moves take longer to launch, rarely activate the buff, and basically give a handful of weak Pokemon a 10% chance to be kind of threatening (aside from Giratina of course who has a 10% chance to make your opponent cry).

Medicham has historically been a solid contender in the Great League, having a spotlight debut as one of the “must have” team members in the Boulder Cup. The main thing that has held it back in the general Great League meta has been how softly Ice Punch hit Flying and Grass-type Pokemon, which would generally overwhelm Medicham with their bulk and/or effective damage. Well, now all of these Pokemon are going to be sorry because after just one Power-Up Punch Medicham is strapped in and ready to win.

Aside from Power-Up Punch and Ice Punch, Medicham also has its fast moves working in its favor. Counter is a powerful Fighting-type attack that has higher energy gains than other attacks on its damage level, and Psycho Cut is one of the highest energy gaining fast moves in the game. The former will allow you to absolutely dominate your opponents if they’re unprepared where the later will serve you better against your counters and in mirror fights.

The sheer dominance of Medicham in the Great League may have you wondering how to best beat it. The best counters are still going to be powerful Grass, Flying, Ghost, and Fairy-type Pokemon, namely Razor Leaf and/or Frenzy Plant users, Mew, Altaria, Azumarill, and Ghost-types (notably Sableye, Alolan Marowak, and Drifblim, but most work). The secret to taking down Medicham with many of these Pokemon isn’t by brute force alone (as Medicham rules in this department) but in finesse. If you don’t shield their first charge move and it is using Power-Up Punch, you will be able to maintain your shields for their later, now boosted, charge moves. If your opponent catches onto this strat they could lead in with Ice Punch, however using Ice Punch may prevent them from being able to sweep. By playing chicken with Ice Punch and shields, your opponent will stand to lose more by siding with Ice Punch every time.

One interesting counter to Medicham is Drifblim. It is able to check the Counter set without much thought and the Psycho Cut set with a little prediction. In countering Medicham, if it gets the Ominous Wind boost it’s set to run over the opponent with its own retaliation sweep. Drifblim isn’t the “best” counter to Medicham, but is an interesting taste of the “buff wars” we may experience as this side of the meta-game develops with the addition of more buff/debuff moves.

With Power-Up Punch Lucario finally has the speed it needs to truly stand out in PvP. With Counter access, a low energy cost charge move that boosts it, and Shadow Ball for coverage, Lucario is a great addition to any PvP team. The main thing that holds it back is its Steel-typing which makes it vulnerable to other Power-Up Punch users. Because of it, Lucario is arguably non-viable for the general Great League because of Medicham’s likeness to be on 100% of the teams. However, Lucario has plenty of opportunities to stand out in the Ultra and Master Leagues and could make a splash in specific Silph Cups.

Giratina Altered Forme is still the ruler of the Ultra League, and no Fighting-type charge move is going to change that. However, Lucario has the ability to check Giratina with Shadow Ball and dissuade it from powering up with its double resistance to Ancient Power. Should Giratina not respect Lucario’s power it can easily find itself on the losing end of the fight.

It’s worth noting that Giratina-A and Lucario also make great partners on your team. Lucario is able to handle the majority of Giratina’s topmost threats (Steelix, Snorlax, Lapras, Cresselia, Mamoswine, Tyranitar) and Giratina is able to dominate the Fighting, Fire, and Ground-type attackers that give Lucario trouble (namely Charizard and Machamp). Both also check Giratina-A itself.

Power-Up Punch users may be taking over the Great and Ultra Leagues, but the Master League is a whole new ball game. Lucario may be able to get the one over on Steel-types like Dialga, Metagross, and Melmetal, but Kyogre and Groudon refuse to yield. Shadow Ball is a cute trick for this diminutive 2703 max CP Pokemon to suppress Psychic and Ghost-types in the Ultra League, but Lugia and Giratina-A will hardly flinch even after a boost. None of this is to say the Lucario is bad in the Master League, even more vanilla Fighting-types can work well in the right scenario. For example, Machamp can make it up here in the big leagues through muscle alone, and Lucario has muscles, buffs, and spooky coverage. That said, you can also add Machamp to Lucario’s list of troubles.

Like Lucario, Poliwrath is kept from standing out in the Great League due to Medicham existing. In the Ultra League, Poliwrath stands out similar to Lucario, threatening Giratina-A with effective damage (Ice Punch) while also wailing on Giratina-A’s counters with Power-Up Punch. The main difference between Poliwrath and Lucario is that Lucario can handle Cresselia well and Poliwrath can handle Lucario well. One problem trainers may have with Poliwrath is that its best fast move, Mud Shot, is a legacy move and is therefore currently unobtainable. Bubble isn’t too far behind, but Mud Shot works better. Compared to Lucario, Mud Shot Poliwrath is a step ahead and Bubble is a step behind. Either set will yield excellent results in the Ultra League though.

For the Master League, Poliwrath doesn’t have the stats to really make it. If Lucario’s Shadow Ball feels a tad too soft, even with a stage 1 boost, Lugia and Giratina won’t even feel Ice Punch. That said, Fighting-type damage is still Fighting-type damage, so just like Machamp Poliwrath isn’t exactly nonviable for this meta, it’s just a risky pick compared to other Pokemon. For example, Machamp does the Fighting-type role well and bullies Poliwrath out a bit. Even without a Fighting-type weakness, Machamp still takes on Poliwrath 1v1 with its already boosted muscle.

Hitmonchan’s stats keep it down in the Great League, and just like with Lucario and Poliwrath, Medicham will bully it out. If Medicham didn’t exist, Hitmonchan would be pretty great with Counter, Power-Up Punch, and any of the three elemental punches. However, if every team wants to have a Medicham and Medicham checks/counters, Medicham will be faced with at least two opposing Pokemon that aren’t phased by it. The only opportunity it has is as a secondary PuP user to follow up Medicham.

Kangaskhan is a great example of how poor Power-Up Punch is when it comes too slow. Kangaskhan could have the opportunity to stand out in the Ultra League with its Crunch access, but with Low Kick and Mud Slap as fast moves it doesn’t reach its charge moves fast enough. If Power-Up Punch is currently “overpowered” in Pokemon GO, Kangaskhan shows that a simple solution exists to nerf it in increasing its energy cost.

Overall, Power-Up Punch is making massive waves in the Great and Ultra Leagues in Pokemon GO. Fortunately for the denizens of the Master League, the Pokemon it’s been distributed to are a bit too small to work out up in their domain. With how much Medicham, Lucario, and Poliwrath are savaging the lower leagues it begs the question; “Is Power-Up Punch overpowered?”

In the main series games, Pokemon could only do one attack per turn. This made Power-Up Punch a calculated risk. In Pokemon GO it can be tossed around haphazardly while your opponent is crushed under the weight of your buffs. This author feels it’s a little ridiculous and could be fairly nerfed with an increased energy cost. With Medicham centralizing the Great League meta, players can expect nerfs in the future, or the addition of new buffs/debuffs to counter. In the meantime though, have fun using it before the next big shift in the meta!