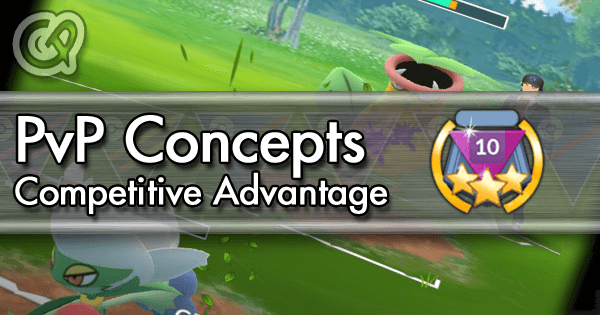 Team building is, without question, one of the most difficult parts of PoGo PvP. Whether it’s Silph-format Show 6/Pick 3, or just GO Battle League’s blind 3s, there are so many Pokémon to choose from. As such, it’s really important to make sure you’re making the best possible use of every single pick. This is where Competitive Advantage comes in.

Competitive Advantage is a term that originates in business/economics circles. In short, it’s the idea of “What does your business do better than anything else?” What’s your unique niche? Why do you stand out? Discord, for example, stands out over a lot of other VOIP programs due to its ease of use aesthetics. Netflix and HBO Max stand out (even between each other) due to their exclusive shows and movies.

Geez fine okay. So, how do you work this into Pokémon GO? The idea here is, “For each Pokémon on your team, why are you picking it over anything else?” To be clear, competitive advantage is not the line between “good” and “bad.” It is, instead, an attempt to define the line between “usable” and “optimal”. A Pokémon can have competitive advantage and still be bad, and can lack it and still work.

It’s probably easiest to illustrate this with examples, so we can start there.

Alolan Marowak, running Fire Spin + Bone Club and Shadow Ball, is the only Pokémon that can beat Registeel at a 2-shield disadvantage. No matter the other pluses and minuses attached to running Alolan Marowak (it struggles to beat Azumarill, Altaria, and Swampert, which are very common picks), there is nothing else that can fill that specific role.

For something with a bit more nuance, we can look at two of the most prominent Grass-types: Venusaur and Meganium. While there are probably closer to 6 meta Grass-types, these two are very notable for their access to Frenzy Plant. This is a niche on its own, since at the moment only four Pokémon even have that privilege (and the other two aren’t very good). Where they differ, though, are stats, typing, and moves.

Venusaur is less bulky, but its Grass/Poison typing and access to Sludge Bomb can be incredibly useful. Sludge Bomb gives you a way to damage Flying-types such as Altaria and Tropius, and the Poison-typing allows you to resist Charm and Fighting-type damage, and only take neutral from Poison. Additionally, the fact that you double resist Grass and swing back with Sludge Bomb gives you a great matchup against other Grasses.

Meganium, on the other hand, is much bulkier than Venusaur. Being a mono-Grass type, you’re not taking super effective damage from Psychic, such as Hypno’s Confusion. With Frenzy Plant + Earthquake, you are unable to deal any meaningful damage to common Flying-types like Altaria, which double resists everything you do. However, with Earthquake, Meganium has a Super Effective hit against Steel-types, allowing you to actually beat Registeel, and deal considerable damage to Alolan Marowak, Alolan Muk, and Toxicroak

If you have an understanding of what’s good, you can also develop an understanding of what’s not, and why that may be. One common trap Pokémon you may see running around is Roserade. With its Razor Leaf + Sludge Bomb and Grass Knot moveset, it seems pretty tempting. Or even Roselia, with Razor Leaf + Sludge Bomb (forgoing a second move). They’re easy to catch on level, and since you only really need Razor Leaf, they’re super cheap. The question is, though, what makes them better than Victreebel? Victreebel also has access to the Grass/Poison-typing, as well as Razor Leaf + Sludge Bomb, but it also has Leaf Blade, a cheap and incredibly powerful move that has much better synergy with Razor Leaf’s low energy gain.

Another common Pokémon that isn’t as good as you’d think is Latias. Dragon/Psychic seems good. Dragon Breath is fantastic. Psychic, Thunder, and Outrage are perfectly solid moves. And hey, it’s Legendary! In a vacuum, it probably wouldn’t be too bad. It’s a little slow, but that doesn’t stop Pokémon like Bastiodon from being strong. So….what’s the catch, then? Well, like with much of Great League, the catch is Altaria. Compared to Latias, Altaria is significantly bulkier, is just as good at using Dragon Breath, but can more effectively back up its Dragon Breath with consistent Sky Attack pressure. Latias is significantly less consistent against common picks like Meganium, Skarmory, Umbreon, and Registeel. With all these things combined, it’s really hard to justify picking Latias over Altaria.

How do I use this information?

Well, in short, it’s just something to keep in mind while building your teams. When you’re putting something on your team, just ask “is there another mon I could use that does this better?” And if the answer’s yes, consider why you’re not using that instead. If not, perfect!

How NOT to use this information

“Has Competitive Advantage” is not directly equivalent to “Good,” and “Lacks Competitive Advantage” doesn’t immediately mean bad. Thunder Shock Raichu has access to the fastest Skull Bash in the game. Arcanine is the only Fire-type with Wild Charge. This gives them competitive advantage, but it doesn’t necessarily make them top picks in a slot. Zweilous is a fantastic pick with some meaningful advantages over Altaria, but there are reasons that you typically see the dragon bird run instead. While one of those reasons is, of course, accessibility, even if it were more accessible, it wouldn't make up for a significantly worse matchup against common picks like Registeel, Counter users, and Grasses. This is not a perfect tool to justify any pick, or to shut down any pick consideration. However, it’s a useful one in your arsenal to help you improve as a player.

This game is hard. That’s not news to anyone. But the more tools you have, the more lenses through which you can look through to understand your game, the easier it gets. Hopefully you can add this to your toolbox to help you improve as a player.